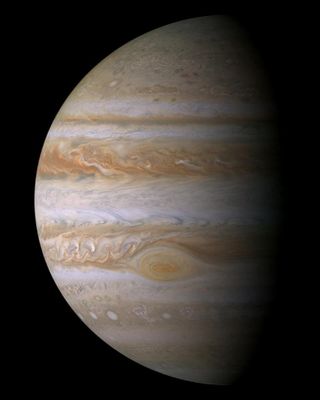 Jupiter's famous Great Red Spot features prominently in this true-color mosaic, which was constructed from images taken by NASA's Cassini spacecraft on Dec. 29, 2000, during its closest approach to the giant planet at a distance of approximately 6.2 million miles (10 million kilometers). At the time, Cassini was on its way to Saturn, which the probe reached on July 1, 2004.
(Image: © NASA/JPL/Space Science Institute)

NASA's Juno spacecraft is about to get the best-ever look at Jupiter's famous Great Red Spot.

The encounter will provide humanity its first up-close looks at the Great Red Spot, which astronomers have been monitoring since 1830.

"Jupiter's mysterious Great Red Spot is probably the best-known feature of Jupiter," Juno principal investigator Scott Bolton, of the Southwest Research Institute in San Antonio, said in a statement. "This monumental storm has raged on the solar system's biggest planet for centuries. Now, Juno and her cloud-penetrating science instruments will dive in to see how deep the roots of this storm go, and help us understand how this giant storm works and what makes it so special."

The $1.1 billion Juno mission launched in August 2011 and arrived in orbit around Jupiter on July 4, 2016. Ever since, the spacecraft has been looping around the gas giant every 53.5 days in a highly elliptical orbit that brings it within a few thousand miles of Jupiter's cloud tops at the closest point, or perijove.

"All eight of the spacecraft's instruments as well as its imager, JunoCam, will be on during the flyby," NASA officials wrote in the same statement.

Juno is using this science gear to study Jupiter's composition and interior structure, gathering data that will reveal clues about the planet's formation and evolution. The probe collects most of this information during its perijove passes.

Juno is scheduled to continue operating through at least February 2018.