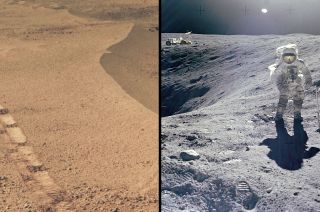 Orion Crater (left), as seen by the Opportunity rover, was named in honor of the Apollo 16 mission's 45th anniversary.
(Image: © NASA/collectSPACE.com)

Two craters on two different worlds that were visited by two NASA missions have now been linked to mark the 45 years between the two explorations.

NASA's Mars rover Opportunity, which has been driving on the Red Planet since 2004, passed by a young crater this past spring during the 45-year anniversary of the Apollo 16 moon landing. The intersection inspired the rover's science team to informally name the Martian feature after the lunar mission's lander.

"Orion Crater" on Mars honors the Apollo 16 lunar module Orion, which carried John Young and Charles Duke to and from the surface of the moon in April 1972. [Apollo 16: NASA's 5th Moon Landing with Astronauts in Pictures]

"It turns out that Orion Crater is almost exactly the same size as Plum Crater on the moon, which John Young and Charles Duke explored on their first of three moonwalks," Jim Rice, of the Planetary Science Institute in Tucson, said in a NASA statement on Friday (June 16).

The fifth of NASA's crewed moon landing missions, Apollo 16 touched down in the Descartes highlands on April 21, 1972. Young and Duke were on the moon's surface for 71 hours, including 20 hours on three moonwalks, while their crewmate, Ken Mattingly, orbited on the command module, Casper.

The Apollo 16 mission was the second to include the lunar roving vehicle, enabling the astronauts to explore greater distances than on previous landing missions. During their first drive, Young and Duke visited Plum Crater, a 118-foot-wide (36-meter), 33-foot-deep (10-m) feature on the rim of the much larger Flag Crater.

It was at Plum Crater, at a distance of 0.87 miles (1.4 km) from the lander Orion, that Young found and collected the largest moon rock returned by any of the Apollo missions, a sample named "Big Muley" after the head of the Apollo 16 geology team, Bill Muehlberger.

Forty-five years later, Opportunity did not collect a sample of the newly-named Orion Crater, but it did photograph the 90-foot (27 m) circular depression. On April 26, the rover's Panoramic Camera (Pancam) of the Martian crater, which is estimated to be about 10 million years old (as compared to Plum Crater, where the sample "Big Muley" is estimated to be nearly 4 billion years old).

Rice, a member of Opportunity's science team, shared the Pancam mosaic of Orion Crater on Mars with Duke.

Orion Crater is the latest feature on Mars to be nicknamed in honor of the Apollo moon missions. At the beginning of Opportunity's mission, the Mars Exploration Rover landed inside Eagle Crater, which the team had informally named after the Apollo 11 lunar module, Eagle. And in 2010, the Mars rover drove past Yankee Clipper Crater, on its way to Intrepid Crater, named in honor of the Apollo 12 command and lunar modules.

In addition to its connection to Apollo 16, Orion is also the name of NASA's new spacecraft being developed to carry humans on deep space missions, back to the moon and to Mars.