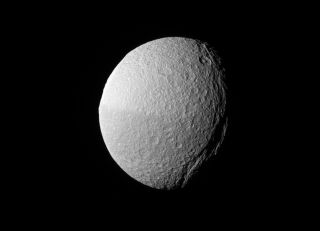 The giant canyon on Saturn's battered moon Tethys snakes into darkness in a new photo by NASA's Cassini spacecraft.

The canyon, known as Ithaca Chasma, is visible at the image's lower right, near the terminator — the line between a celestial object's dayside and nightside.

"Ithaca Chasma is up to 60 miles (100 kilometers) wide, and runs nearly three-fourths of the way around icy Tethys (660 miles or 1,062 kilometers across)," NASA officials wrote in a statement today (April 24). "The canyon has a maximum depth of nearly 2.4 miles (4 kilometers) deep."

The contours of Tethys' other large, remarkable feature — a crater called Odysseus, which makes the moon look like an eyeball when viewed from some angles — are barely visible at the upper left, NASA officials added.

The $3.2 billion Cassini-Huygens mission — a joint effort of NASA, the European Space Agency and the Italian Space Agency — launched in October 1997 and reached the Saturn system in July 2004. (Huygens was a piggyback lander that touched down on the Saturn moon Titan in January 2005.)

Cassini's fuel is running out, and therefore, the orbiter's work at the ringed planet is almost done. On Wednesday (April 26), Cassini will begin the Grand Finale phase of its mission, performing the first of 22 dives between Saturn's cloud tops and the gas giant's innermost ring. (This gap is just 1,500 miles, or 2,400 km, wide.)

Cassini will go out in a blaze of glory on Sept. 15, plunging into Saturn's atmosphere in a death dive designed to ensure that the probe doesn't contaminate Titan or fellow Saturn satellite Enceladus with microbes from Earth. Scientists think that both moons may be capable of supporting life.