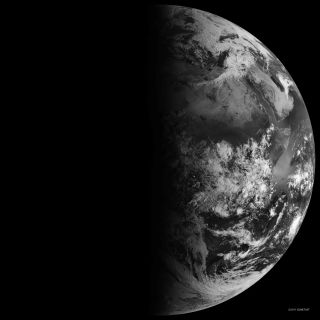 This image of Earth was captured during the spring equinox in 2011 at 6:12 a.m. local time, by the Spinning Enhanced Visible and Infrared Imager (SEVIRI) on the Meteosat-9 satellite from geosynchronous orbit.
(Image: © NASA)

In mid-March, snow and ice still frost the ground and winter's grip feels as strong as ever in many parts of the Northern Hemisphere.

But an annual celestial alignment between Earth and the sun known as the spring equinox, which occurred today (March 20) at 6:28 a.m. ET, announced that the seasons are shifting and spring is on the way.

Twice in a year, the Earth reaches a point during its annual journey around the sun when the Northern and Southern hemispheres — the two planetary zones bisected by the equator — receive the same amount of daylight, a phenomenon called an equinox, or "equal night" in Latin. In the Northern Hemisphere, what is known as the spring equinox also marks the beginning of fall in the Southern Hemisphere. The Northern Hemisphere's autumnal equinox — six months later, on Sept. 22 — heralds the coming of spring south of the equator. [6 Signs Spring Has Sprung]

Because Earth orbits the sun while tilted on its axis at about 23.5 degrees, daylight is almost always distributed unequally across the planet. Depending on Earth's orbital position, either the Northern Hemisphere or the Southern is illuminated longer during a 24-hour cycle, C. Alex Young, associate director for science in the Heliophysics Science Division at NASA's Goddard Space Flight Center, told Live Science.

"During two special times twice a year, the tilt is actually perpendicular to the sun, which means that Earth is equally illuminated in the Northern and Southern hemispheres," Young said.

Earth is so lit

It's uncertain when ancient civilizations first became aware of this phenomenon, though humans have been creating structures to observe the changing positions of the sun in the sky and its relationship to the seasons for thousands of years, Young said. Today, spacecraft offer views of Earth that easily capture the distribution of light across the planet's surface at any given time of the year. And when an equinox occurs, "you can see this effect quite well," Young said.

These long-range views of Earth offer an important "big picture" understanding of our planet that can only be obtained by looking at it from a distance, Young told Live Science. [Earth from Above: 101 Stunning Images from Orbit]

"Once we were able to put satellites into space we were able to see the extent of cloud cover, landmasses, bodies of water. It's given us a new perspective on this very complicated and very vital system," he said.

In addition to the two annual equinoxes, another much rarer solar alignment is expected later this year. A total solar eclipse will be visible across the entire United States on Aug. 21 — the first such eclipse in the U.S. in nearly 40 years. It will travel across the country for about 90 minutes, allowing scientists to make detailed observations of the sun itself and of the eclipse's effects on Earth, a NASA statement reported.

But even when an eclipse isn't anticipated, NASA's observations of the sun are ongoing. Currently, there are 20 missions and 23 spacecraft — known collectively as the Heliophysics System Observatory (HSO) — studying the complex dance between Earth and the sun, evaluating their energy dynamics in order to better understand their individual processes and how they interact.

And NASA expects to get an even closer look at the sun in 2018, with Solar Probe Plus (SPP), an uncrewed space mission that will fly closer to the sun than any other human-made object. The SPP will approach the sun to within 4 million miles (6 million kilometers), plunging into the corona — the sun's outermost layer — which starts approximately 1,300 miles (2,100 km) above the solar surface and does not have a defined outer boundary.

Temperatures in the corona range from 900,000 degrees to several million degrees Fahrenheit (about 500,000 degrees Celsius), according to NASA. One of the SPP's goals will be exploring why the sun's corona is so much hotter than its surface, where temperatures reach only 10,000 F (5,500 C).

The SPP will also investigate what causes the sun to emit certain types of high-energy particles that can endanger astronauts and spacecraft, and the forces that accelerate solar winds.