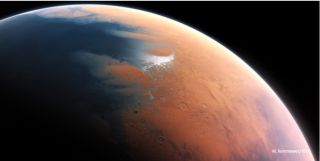 Scientists have a new theory for how early Mars managed to stay warm enough for liquid surface water, a condition that is believed to be essential for life.

An armada of orbiters, landers and rovers studying Mars have returned overwhelming evidence that the dry, cold planet of today was far different three- to four billion years ago when rivers and lakes periodically flowed across its surface.

But at that time, Mars should have been too cold for water to remain liquid.

Newly published research shows Mars' atmosphere may have had periods of warming due to greenhouse gases spurred largely by the release of methane.

"The early Mars climate problem has been around for a long time," lead researcher Robin Wordsworth, with Harvard University's School of Engineering and Applied Science, told Seeker. "All the previously proposed explanations just didn't work. We couldn't get the climate warm enough or wet enough for long."

RELATED: On Mars, Life Could Be Hiding Under the Rocks

Blankets of greenhouse gases could have kept Mars warm for spans of time lasting tens of thousands of years, but not hundreds of millions of years, Wordsworth noted, a finding that matches the evidence of the periodic presence of water coming from NASA's Curiosity rover and other spacecraft at Mars.

Wordsworth said he got the idea about methane bursts from looking at Titan, the largest moon of Saturn and the only body in the solar system besides Earth that has a substantial atmosphere. Titan is loaded with methane, as well as other hydrocarbons.

"It's an analog for how Mars might have been," Wordsworth said.

The scientists expect data from NASA's ongoing MAVEN mission, which is monitoring how Mars' atmosphere is bleeding away into space, will flesh out their models of the planet's past climate.

"MAVEN is an important mission. I think it is going to give us much better constraints on the evolution of the atmosphere backwards in time," Wordsworth said.

The finding also has implications for looking for life beyond the solar system, the authors note.

"Our results also suggest that inhabited exoplanets could retain surface liquid water at significant distances from their host stars," the paper said.

WATCH VIDEO: Here's Why We Can't Live Stream From Mars