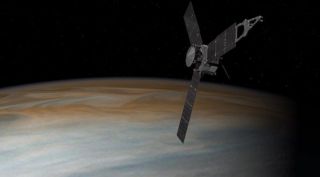 An illustration of NASA's Juno spacecraft in orbit around Jupiter.
(Image: © NASA/JPL-Caltech)

COLUMBIA, Md. — An ongoing investigation into a thruster problem on NASA's Juno spacecraft orbiting Jupiter is looking into a possible connection with a malfunction of a similar thruster on a recently launched Intelsat satellite.

That maneuver was scheduled for Oct. 19, when the spacecraft made its latest close approach to Jupiter in its current 53-day elliptical orbit. However, five days earlier NASA's Jet Propulsion Laboratory announced it was postponing the maneuver after a pair of helium valves on the spacecraft opened more slowly than expected.

Green said one part of the investigation is studying any connection to a similar malfunctioning thruster. "It was made known to us that the rocket we currently have on Juno, the retrorocket that gets us into orbit, is in the same family as one that has been malfunctioning on the Intelsats," he said. [Photos: NASA's Juno Mission to Jupiter]

He was referring to Intelsat 33e, a Boeing 702MP satellite launched in August. On Sept. 9, Intelsat announced that the spacecraft's entry into service in geostationary orbit would be delayed from fourth quarter of 2016 to the first quarter of 2017 because of a thruster malfunction. That model of satellite uses a Leros engine, manufactured by Moog, to raise its orbit after deployment.

While Juno uses a different version of the Leros engine than the one on Intelsat 33e, and launched five years earlier, Green said engineers were investigating whether there may be any links between the two. "Whenever that happens, we step back and take a good look at what we have, how it's implemented, look at the failure modes for these similar things," he said, "and then do an analysis on what we're going to do next and what the probability is of what we have on our spacecraft failing."

Green didn't give a schedule for performing that review, but indicated NASA was not in a hurry. "We're going very slow in that process," he said. "We're going to take another cycle around Jupiter and really study what's happening before we make a decision on what to do next."

Likewise, JPL has released no additional details about the problem noticed with Juno's engine in October, when valves that should have opened in seconds instead took several minutes. "We need to better understand this issue before moving forward with a burn of the main engine," Juno project manager Rick Nybakken said in an Oct. 14 statement that said the maneuver would delayed at least one orbit, to Dec. 11.

JPL spokesman D.C. Agle said Nov. 2 there were no updates on the Juno thruster investigation. He added, though, that the Dec. 11 close approach will be a "science pass," with no plans to fire the engine.

NASA attempted to collect science data during the Oct. 19 flyby as well. However, an unrelated problem put the spacecraft into a protective safe mode more than 13 hours before closest approach. The spacecraft resumed normal operations Oct. 24.

Green noted that Juno can still carry out its mission in its current orbit, since the bulk of the data it collects is during the close approaches to the planet. The maneuver, though, would reduce the spacecraft's period from 53 to 14 days, giving it more flybys and opportunities to gather more data in a given period of time.

"We want to really take a good look at it and get it down into its lower orbit if at all possible," he said, "if we feel like that's a risk we can take with the system that we have onboard."