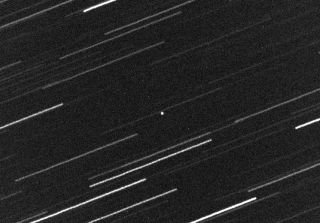 2016 VA was discovered just yesterday, by astronomers with the Mt. Lemmon Survey in Arizona. Surprise asteroid encounters like last night's flyby aren't uncommon; millions of space rocks are thought to orbit the sun in Earth's neighborhood, and scientists have discovered just 15,000 of them.

Indeed, a previously unknown object famously slammed into Earth's atmosphere above the Russian city of Chelyabinsk in February 2013. This rock exploded in the air, generating a shock wave that shattered thousands of windows in the city below; more than 1,200 people were wounded by shards of flying glass.

The Chelyabinsk object was probably about 66 feet (20 m) wide, scientists have said. (Asteroids have to be much bigger to cause damage on a global scale; researchers think impacting space rocks must be at least 0.6 miles, or 1 km, wide to threaten human civilization.)

You can learn more about 2016 VA at the MPC site here: http://minorplanetcenter.net/db_search/show_object?object_id=2016 VA