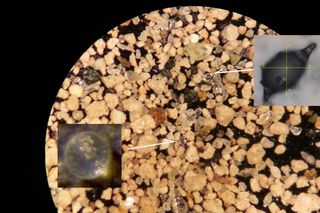 Microtektites, as first seen in a sediment sample from the onset of the Paleocene-Eocene Thermal Maximum.
(Image: © Morgan Schaller)

A meteorite may have hit the surface of the Earth about 56 million years ago, raining debris for hundreds of miles across the Atlantic Ocean and what is now the East Coast of the U.S.

Evidence of the impact appeared in the form of tiny, roughly spherical bits of glass that were found buried in ancient layers of Earth in New Jersey and off the coast of Florida. A falling meteorite can hit the Earth with an incredible amount of energy, and vaporize or melt the surrounding water, rock and soil. The superheating can form new physical structures, like glass.

The pellets were found in four separate locations, some of them separated by more than to 1,000 kilometers (621 miles), but they appear to be from the same impact event, according a new study announcing the discovery, published in the Oct. 13 issue of the journal Science. It is not yet known how big the meteorite was, or where it hit the Earth, the authors of the study said.

Morgan Schaller, an assistant professor of earth and environmental sciences at Rensselaer Polytechnic Institute in Troy, New York, was looking for biological fossils from a period in Earth's history known as the Paleocene-Eocene boundary (or the Paleocene-Eocene Thermal Maximum), which took place about 55 million years ago. While searching for small, white shells, he happened to spot one of the black glass spheroids, also known as microtektites or microkrystites, according to a statement from Rensselaer.

"It was an accident," Schaller, who co-authored the new study, told Space.com.

That original core sample came from a site in New Jersey. Schaller and his colleagues looked at two other core samples — another in New Jersey, and a second sample taken from the floor of the Atlantic Ocean, more than 620 miles (1,000 km) away. A fourth sample was later taken from another site in New Jersey to confirm that the other samples had not been contaminated or potentially altered by underground drilling; the microtektites were found there as well, according to the paper. [When Space Attacks: The 6 Craziest Meteor Impacts]

During the Paleocene-Eocene boundary, Earth experienced a period of intense global warming. While some evidence has suggested that volcanic activity may have been responsible for the global heating, the new paper explains that the newly discovered microtektites could not have been formed by volcanic activity. For one, the microtektites contain high-temperature glass. A terrestrial volcano cannot produce temperatures and conditions required to produce high-temperature glass, Schaller told Space.com, but meteorite impacts can.

In addition, the scientists found "shocked quartz" in the microtektites. Quartz has a very organized molecular structure, and a "shocked" grain shows signs of intense physical pressure that has altered what is normally an orderly molecular arrangement. Those quartz grains were not liquefied by the impact, the researchers said, but were mixed with the liquid material and can be found essentially petrified in the microtektites. Shocked quartz does not form from volcanic activity, Schaller said.

Those characteristics indicate that there was a meteorite strike, but they also show that all of the microtektites found in the four different sites formed from the same event, Schaller said. All four locations contain microtektites with high-temperature glass and with shocked quartz, and they also have the same chemistry,  he said, suggesting that the material they formed from originated in the same place.

"Wherever the projectile hits, the material it hits has a unique chemistry to begin with," Schaller said. That material could be a dense rock found in the Appalachian Mountains or carbonate platforms at the bottom of the ocean. "All that stuff's going to be [vaporized or melted] and flung up in [the] air, and have very little time to mix with one another. So you're going to find a range of chemistries [in the microtektites] that are all kind of consistent with different mixes of the material that was hit."

"Right now, all we can say is that it's either small and close by, or big and far away," Schaller said. But he added that this approach doesn't always reveal an impact site — ejecta, or material flung from volcanoes, have been found "all over the globe" from what's known as the Australasian Impact, but scientists have not been able to find the impact crater.

To find more microtektites from the newly discovered impact, the team will have to study layers of Earth from areas that were underwater when the impact took place, Schaller said, because the microtektites are quickly destroyed when they're on the surface of the Earth and exposed to weather.

"I think I'd compare their preservation potential to a scoop of ice cream," he said. "But they do get preserved in ocean sediment."

(The three New Jersey sites where the team took samples would have been under water 56 million years ago).

The association of the impact with the onset of the Paleocene-Eocene boundary is "nothing short of remarkable," Schaller said in a statement from Rensselaer. He told Space.com that because the microtektites can be radiometrically dated, they offer a new milestone in the Earth's history that could help scientists date layers of Earth in the future. The goal of studying this particular period in Earth's history, he said, is to understand what happens to the planet when global temperatures rise.