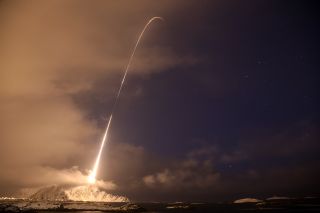 This image shows a four-stage Black Brant XII sounding rocket on Dec. 12, 2010, during the NASA-funded Rocket Experiment for Neutral Upwelling (RENU). The rocket was launched from Andøya Rocket Range near Andenes, Norway, and carried instruments about 200 miles (320 kilometers) into the atmosphere to observe the aurora and the associated flow of heat, particles, and electromagnetic energy.
(Image: © NASA Earth Observatory / Kolbjørn Blix Dahle of Andøya Rocket Range)

Andøya Space Center is a rocket range on Andøya island in northern Norway. While the area is remote — about two degrees north of the Arctic circle — the facility has an airport and several daily flights to Tromsø and Bodø.

"ASC supports sounding rocket and balloon operations both at Andøya and at Svalbard, and is host to a large array of ground-based scientific instruments," the center wrote on its website. "ASC also owns and operates the ALOMAR lidar observatory located at the top of the nearby mountain — Ramnan (380 m above sea level)."

ASC bills itself as an excellent location for sounding rockets, both at its Andøya and Svalbard sites. Sounding rockets are used to test instruments that will go on satellites and spacecraft, according to NASA. They also provide information about the sun, stars, galaxies and Earth's atmosphere and radiation. Andøya's ALOMAR lidar observatory can assist with measurements and can support several missions at the same time. At Svalbard, which is farther north, payloads can easily fly into the daytime aurora, the magnetospheric boundary layer and the polar cusp, a region where the lines of the magnetic field split.

"Stretching north from Andøya, our impact area covers most of the Norwegian Sea," ASC writes on its website. "This reduces the need to have costly and complicated attitude control systems onboard. You will also save precious weight, enabling your vehicle to reach higher altitudes or carry a heavier payload."

In 2015, NASA and the Navy set a world record for the most engines ever run in one rocket flight, which launched from Andøya with 44 engines on board. The experiment was intended to study "dusty plasma," which are gas and dust mixtures that can occur in the mesosphere (the atmospheric region about 30 to 50 miles, or 50 to 80 kilometers, above the surface). Most of these engines were used to generate an exhaust cloud for the experiment.

Other NASA experiments at Andøya have looked at the origins of noctilucent clouds (a high-altitude cloud that glows at night), geomagnetic activity, auroras and the effects of space weather.

In 1995, according to the U.S. European Command (EUCOM), Russia may have come close to launching a nuclear attack when it mistook a research rocket (a Black Brant XII) launching from Andøya. But the threat quickly dissipated once the Russians looked at the trajectory more closely. (Notably, the scientists involved had advised 30 countries of their rocket launch, but according to EUCOM, the Russian radar scientists looking at that rocket did not have that information passed to them.)

"Russian doctrine reportedly allowed [Russian president Boris] Yeltsin ten minutes from the time of detection to decide on a course of action,"EUCOM wrote. "Russian observers were quickly able to determine that the rocket was heading away from Russian airspace and was not a threat. Reports differ greatly as to whether or not Yeltsin came close to authorizing an attack, but the general consensus is that Yeltsin was able to conclude that there was no basis for attack, and therefore no danger."

Besides rocket launches, Andøya is host to the Arctic Lidar Observatory for Middle Atmosphere Research (ALOMAR), which was established in 1994. It has instruments contributed by universities and institutes in eight countries, who also share the operation costs.

This research is helpful for understanding the Earth's atmosphere in general, and also climate change. As such, ALOMAR is partly funded by the Norwegian Environmental Agency's ozone and UV monitoring program.

"With increased interests in climate change in recent years, instruments to study the atmospheric boundary layer, long-range transport of aerosols in the troposphere as well as cirrus clouds, have been added," wrote the Norwegian Institute for Air Research on its website, adding, "Moreover, fluxes of carbon-dioxide and methane from a pristine mire, a few kilometers away from the observatory, are investigated."