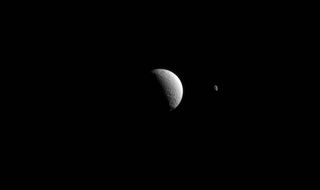 Saturn's moons Tethys (right) and Hyperion (left) look like cosmic neighbors in this new photo from NASA's Cassini spacecraft. However, in reality, the two bodies are separated by thousands of miles.
(Image: © NASA/JPL-Caltech/Space Science Institute)

Two of Saturn's moons, Tethys and Hyperion, appear remarkably close in a new image from NASA's Cassini spacecraft, despite their actual distance from one another.

The two moons were 930,000 miles (1.5 million kilometers) from one another when the image was taken Aug. 15. Tethys, the larger body at left in the image, and Hyperion are thought to be composed almost entirely of water ice, based on their density.

Tethys is the fifth largest of Saturn's 62 known moons, at 660 miles (1,062 km) across. Visible light reflects off its pockmarked surface in this new Cassini image. [Photos: The Rings and Moons of Saturn in Pictures]

Like many of Saturn's moons, Tethys's surface bears large impact craters and deep crevasses. One such feature is Ithaca Chasma, which cuts 3 miles (5 km) deep in some locations and extends about three-quarters of the way around the moon.

Like Tethys, Hyperion has suffered numerous impacts that left deep dents, but porous features give the moon a more sponge-like appearance.

Hyperion stands out among Saturn's moons for its potato-like shape. In fact, Hyperion, which measures 170 miles (270 km) across, is considered one of the largest known irregularly shaped moons in the solar system.

The Cassini spacecraft entered Saturn's orbit in 2004 and is set to end its mission in September 2017.