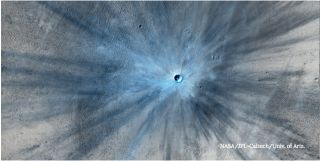 The sites of meteorite impacts on Mars are often considered to be good places to look for life. After all, it's most likely that if any trace of life (past or present) ever took hold on the Red Planet, it would most likely be preserved under the bedrock of Mars' harsh surface. Should there be a recent impact, could we search the debris to seek-out this recently excavated pristine rock for life?

Alas, in new research, this kind of impact crater search could be a fool's errand; the energy of the impact likely sterilized any material we'd consider organic and related to life.

Researchers from Imperial College London carried out simulations of meteorite impacts in the lab to see how organic compounds fared when exposed to the kinds of impact pressures they could experience on Mars.

What they found wasn't very promising if we hope to find evidence of life inside impact craters. For example, organic compounds associated with basic microbial and algal life (known as long chain hydrocarbon-dominated matter) were destroyed by the pressure of impact. On the other hand, other organic compounds associated with plant life (known as aromatic hydrocarbons) were chemically altered, but, according to a press release, "remained relatively resistant to impact pressures."

Meteorites often contain organic chemicals not related to life that are resistant to the pressures of massive impacts.

RELATED: Oh Mars, What Strange Craters You Have

So far, there has been little evidence of organics found that would suggest any kind of life has ever existed on Mars, but this new research provides an insight to what could be a previously overlooked complication in that search for life.

"We've literally only scratched the surface of Mars in our search for life, but so far the results have been inconclusive," said Mark Sephton of Imperial College London. "Rocks excavated through meteorite impacts provide scientists with another unique opportunity to explore for signs of life, without having to resort to complicated drilling missions. Our study is showing us is that we may need to be nuanced in our approach to the rocks we choose to analyse."

Rather than relying on computer simulations of meteorite impacts, the researchers used a piston cylindrical device to recreate the pressures and temperatures associated with a range of impact energies on various materials. They will continue to carry out these lab tests to see what energies give hypothetical Mars life the best chance of leaving their biological signature and which will pulverize their biology into oblivion.

RELATED: Why a Mars Comet Impact Would be Awesome

"The study is helping us to see that when organic matter is observed on Mars, no matter where, it must be considered whether the sample could have been affected by the pressures associated with blast impacts," added Wren Montgomery, also from Imperial. "We still need to do more work to understand what factors may play an important role in protecting organic compounds from these blast impacts. However, we think some of the factors may include the depths at which the rock records are buried and the angles at which meteorites hit the Martian surface."

As we plan further exploration of the Martian surface, the more we can learn about where potential signs of Mars life could be hiding the better as, for now, we can't assume that every crater will be a Mars biology goldmine.