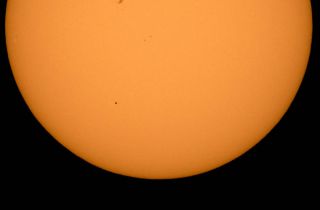 The tiny spot of Mercury can be seen crossing the face of the sun in this observation of the transit on May 9 from Boyertown, Pennsylvania.
(Image: © NASA/Bill Ingalls)

On Monday, the transit of Mercury wasn't just an opportunity for (most of) the planet to share a common astronomical phenomenon; it was a chance to carry out some cutting-edge science as well as a special moment to do classical astronomical measurements that underpin our modern understanding of the universe.

As part of the inaugural #MeetESO social media meet-up, Discovery News was lucky to be perfectly-placed to see the Mercury Transit at the driest region of the planet, high in the Atacama Desert in Chile, visiting the European Southern Observatory's Paranal Observatory.

As part of an effort to live-stream the Mercury transit in conjunction with another event in Tenerife, ESA astronomers also made the journey to the observatory to watch the solar system’s smallest planet make its big entrance.

When a planet passes in front of its star, the event is known as a transit. This applies to our solar system as well as exoplanets orbiting other stars. In the case of the solar system, from our planet's perspective, we will only see Mercury or Venus make their several-hour dash across the sun's disk as they are the only 2 planets that orbit closer to the sun than Earth.

When this happens, an opportunity presents itself.

"Many exoplanets have been discovered orbiting other stars, but by watching the transit here, we can compare this with exoplanets passing in front of other stars," said Miguel Pérez Ayucar, of ESA's European Space Astronomy Centre (ESAC) in Spain, while observing the event near the summit of Paranal.

We can use the Mercury transit as an exoplanet analog, to see how the transit looks from Earth and then comparing that with transits of distant worlds orbitng other stars.

Missions such as NASA's Kepler space telescope watch for the slight dimming of the light of stars, revelaing that an exoplanet has paassed in front, blocking a tiny amount of starlight. This is exactly what Mercury did on Monday (and Venus last did in 2012), so these transits close to home can be used as a tool to understand transits far away.

Also, the Mercury transit can be used to study the planet's exosphere — an extremely thin atmosphere that fizzes into space. Sunlight that passes through the exosphere is encoded with spectroscopic data that can then be used to work out the nature of the environment surrounding Mercury. As we've had missions that have explored the planet, such as NASA's MESSENGER mission (and future ESA BepiColumbo) we have the "ground truth" as to the characteristics of that exosphere, so we can compare direct measurements with transit observations to better calibrate astronomical techniques.

"For (the Venus transit) it was better in that Venus has a dense atmosphere, much denser than Earth's," Pérez Ayucar told Discovery News. "The effect of that atmosphere is very clear in the signal of the sun so you could study the atmosphere by looking at the planet's light-curve. However, the last Venus transit was in 2012 and the next one isn't until 2117 … so I probably won't see it."

Despite the cool modern science that can be done, the Mercury transit acts as a reminder as to how cosmic distances were calculated. Hundreds of years ago, the first measurements of the distance between the Earth and the sun were carried out by observing the transits of Mercury and Venus from distant locations on the planet. By precisely recording the time of the start and finish of the transit, this calculation could be made.

"There is something special about being hands on, doing the historic calculations yourself," said Manuel Castillo, also of ESAC. "We can set up a telescope here and with a team in another place, you can calculate the distance from the sun to the Earth yourself."

Although the measurement isn't particularly accurate, when considering more precise modern methods that can be applied, "you're replicating the way man built the scales of the universe through history," he said.

And then things get really interesting. "When you (know the distance between the sun and the Earth) you can calculate the parallax to the stars," added Castillo, and from there, astronomers through history have built on these classical measurements to calculate the distance to the stars, then to the galaxies, ultimately realizing we're living in an expanding universe.

In short, astronomy doesn't only unite the world in a common fascination for the cosmos, it unites the discoveries made through history. We may have cutting-edge equipment and a better grasp on astronomical techniques, but making these basic astronomical observations of Mercury transit the sun, we connect in a very special way with the pioneers who painstakingly made those first, historic measurements.

To keep up with our adventures in the Atacama Desert, be sure to follow the #MeetESO hashtag across social media platforms — 7 other participants are providing their unique view on the most powerful observatories on the planet, so don't miss out!