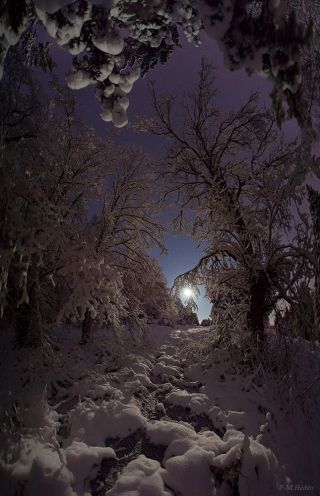 The moon shines brightly over a winter wonderland near Stockholm in this image taken by astrophotographer P-M Hedén in December 2012.
(Image: © P-M Heden/clearskies.se)

The image of a bright moon coinciding with Christmas Eve can be found in the classic poem "A Visit from St. Nicholas," (today more commonly known as "The Night Before Christmas") first published in 1823.

The narrator described his view through his bedroom window when Saint Nick was about to make his first appearance in the tale: "The moon on the breast of the new fallen snow, gave the luster of mid-day to objects below."

If you live anywhere east of the Mississippi River this year, you likely will not have snow on the ground on Christmas morning, but you will have a full moon. The moon will officially reach peak fullness at 6:11 a.m. EST (1111 GMT). A full moon coinciding with Christmas does not happen often — usually, once every 19 years. But this time, it is different, because a full moon on Christmas hasn't happened in nearly four decades. The last one was in 1977, and that's because of the vagaries of our calendar and a lunar cycle known for almost 2,500 years. [The First Christmas in Space: An Apollo 8 Holiday History]

The online Slooh Community Observatory will host a free webcast of the Christmas full moon on Christmas Eve (Dec. 24) at 7 p.m. EST (0000 GMT).  You can go to Slooh.com to join and watch the broadcast, and also see Slooh's library of past shows. You can also watch the broadcast here on Space.com, courtesy of Slooh.

According to the cycle, a Christmas Day full moon should have happened 19 years ago, in 1996, but it didn't because the Metonic cycle is only approximate and the number of leap days (four or five) in a period of 19 years can give rise to a discrepancy of one day.

Interestingly, if we use the Metonic cycle going backward from 1996, we also jump forward one day to Christmas Day in 1977, which was the last time we had a full moon on Christmas Day.

Now, if we add 19 years to 2015, we find that the Metonic cycle will work perfectly with no one-day jumps — so the next time a full moon will occur on Christmas Day will be in 2034. But that will work only for the 48 contiguous states, because for those living in Alaska and Hawaii, the moon will officially turn full before the stroke of midnight on Christmas Eve.

Even if a full moon doesn't occur precisely on Christmas Day, most people probably will not notice that the moon isn't actually "full." Take this year, for example: The moon will appear perfectly full just before sunrise on Christmas morning, but later that evening, if you look carefully enough, you'll be able to detect very slight out-of-roundness to the "full" moon. Indeed, full phase will have occurred 12 or more hours earlier, and what everybody will be looking at that Friday night will, in reality, be a waning gibbous moon.

Christmas cards and other holiday imagery frequently depict Santa Claus and his reindeer flying across the nighttime sky, backlit by a luminous full moon. This year, the full moon on Christmas Day will be a reality. A full moon and Christmas have been linked in many stories, movies and television shows.

Examples include the beloved television specials "Frosty the Snowman" (1969) and "Rudolph the Red-Nosed Reindeer" (1964), as well as the movie "The Santa Clause" (1994) starring Tim Allen. However, in that movie, we see a celestial event that can never happen: When Allen's character (Scott Calvin) finishes Santa's work and returns to the North Pole as the morning comes, we see a full moon in the sky. A year later, at the movie's conclusion, we see Scott and his son Charlie heading out into the night to continue Santa's deliveries as Scott has accepted his new life as Santa Claus — and the full moon is shining brightly in the sky yet again. But there cannot be a full moon on Christmas in consecutive years!

'Twas the night before Christmas

On Dec. 23, 1962, on the NBC weekend radio show "Monitor," newscaster Frank McGee told the story of Clement Clarke Moore and how he came upon writing his "Visit from St. Nicholas." You can listen to that broadcast here.

"Christmas Eve, New York, 1832," McGee said. "A storm earlier that day, but a full moon had risen and shone now on the crest of the new-fallen snow that lay snow white across the city."

Supposedly, the snow on the ground and the bright moon in the sky led Moore to think back to what McGee referred to as "an old legend from the last century and maybe before; a folk thing of undetermined origin and, by 1822, almost forgotten — the story of the good St. Nicholas."

Because his two daughters had never heard the tale, Moore supposedly wrote his memorable poem that very evening. The rest, as they say, is history. We can't say, however, with absolute certainty, if Moore was indeed the author. Some scholars today debate the true identity and cite Major Henry Livingston Jr. as the true author. Moore himself denied he had written the poem until he included it in an 1844 anthology of his works.

But was it a full moon that shone down on New York City on that famous Christmas Eve in 1822? The actual phase of the moon was not mentioned in the poem, although it was strongly inferred that it was, indeed, a full moon by the light it cast on the snow. Certainly, McGee thought it was so, but we can state unequivocally that the answer is "no." The moon would not turn full until several nights later, just after midnight on Dec. 28. On Christmas Eve, at 8 p.m. local time, the moon was 85 percent illuminated (a waxing gibbous) and was soaring high in the southeast sky.

So, although it was not full, it was nearly full and certainly bright enough to light up the snow-covered landscape for a Christmas night 193 years ago.

Happy Christmas to all, and to all a good night!

Editor's note: If you capture an amazing photo of the Christmas full moon that you'd like to share with Space.com and our news partners for a possible story or image gallery, you can send images and comments in to managing editor Tariq Malik at spacephotos@space.com.