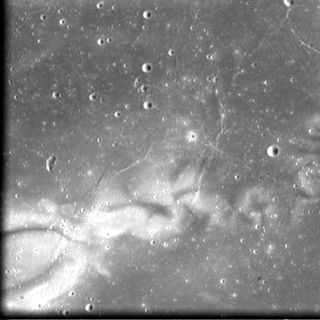 This 3D anaglyph image shows the Reiner Gamma Formation, a totally flat area consisting of much brighter material than the surrounding dark mare. The image is centered on an area located at 57.8° West, 8.1° North, in the Oceanus Procellarum on the near (visible) side of the Moon, and has an extension of approximately 30 by 60 kilometres. Credits: ESA/Space-X (Space Exploration Institute)

The lunar surface is a harsh landscape; a bone dry expanse of impact-pummelled rock whose "seas" have long been known as a misnomer. The only precipitation is in the form of solar and cosmic radiation that gradually darkens the dust and corrupts the cells of any astronauts present.

Yet amidst this hostile landscape a number of safer havens exist where the lunar surface escapes much of this sleet of radiation. One such benign feature, named Reiner Gamma [image], lies on the Moon's Earth facing side and is marked by a 37-mile-long (60 km) bright swirl and one of the strongest magnetic fields found on the lunar surface.

"The Moon presently has no global magnetic field similar to the Earth's. The observed fields [such as that at Reiner Gamma] are caused by permanent magnetization of parts of the lunar crust," said Lon Hood of the University of Arizona.

These isolated pockets of lunar magnetism were discovered in the early 1970's by lunar-orbiting spacecraft and their formation is thought to be as dramatic as their appearance.

"Current evidence suggests that impact-basin ejecta materials [material blasted out by huge asteroid or comet impacts] are the most likely sources of many or all of the magnetic fields,"  Hood said "These ejecta contain microscopic metallic iron particles that are the carriers of the magnetization."

This material became magnetized by the strong magnetic field present at the time of impact and also from the magnetic fields generated during other large, basin-forming impacts. Evidence for this is seen in the way swirls present on the lunar far side lie directly opposite impact basins on the Earth-facing side of the Moon.

The bright swirls of Reiner Gamma are a by-product of the contorted magnetic field arching overhead, and there are currently two models for the formation of the enigmatic swirls associated with the fields.

The first hypothesis is that the swirls consist of secondary crater ejecta whose bright deposits have been preserved by a strong local crustal magnetic field.

The second mechanism for the swirls' formation is the relatively recent impact of a comet nucleus. Such an event would create a feature similar to Reiner Gamma and also magnetize the lunar surface.

From the perspective of human explorers, Reiner Gamma boasts one of the most scientifically interesting locations on the Moon.

"The main benefit would be to provide samples that are potentially free from solar-wind ion bombardment," Hood said. "This would be useful for understanding better the process that darkens the lunar surface and other airless silicate surfaces in the inner solar system."

Not only does the magnetic field preserve an unsullied lunar surface but it would partially protect any astronauts strolling beneath, "The lunar fields are strong enough to deflect solar wind ions with energies of several kilo-electron-volts," Hood said.

Reiner Gamma's magnetic shield also channels the solar ions it does divert into narrow regions surrounding the feature, another boon for human exploration.

"This would concentrate solar wind hydrogen and helium-3 locally which might be beneficial to increase the efficiency of mining these for resource applications," Hood said. Helium-3 is a light isotope of helium carried in the solar wind and is a potential fuel for efficient and non-polluting nuclear fusion. The hydrogen would also be essential to the manufacture of water for a lunar outpost.

Only a spacecraft on the surface will be able to definitively reveal the method of Reiner Gamma's formation. Until then, future lunar orbiters such as NASA's Lunar Reconnaissance Orbiter and India's Chandrayaan-1 spacecraft will undertake further analysis of this unusual feature.