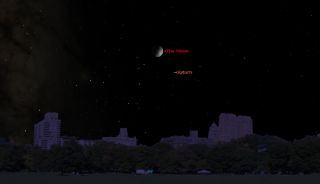 Saturn will shine near the first quarter moon on Aug. 22, 2015. The ringed planet will be visible as a bright dot to the lower right of the moon in the southwestern night sky.
(Image: © Starry Night Software)

If the weather is clear in your area on tonight (Aug. 22), you'll have an opportunity to see what probably are for most people, the two most popular objects to look at through a telescope: Saturn and the moon.

About an hour after sunset, roughly one-quarter of the way up in the south-southwest sky, you'll see the first quarter moon. Actually, the moment of first quarter phase occurred earlier in the day – 2:31 p.m. Eastern Time; 11:31 a.m. Pacific Time. So what you’ll be seeing is a waxing gibbous moon, a little more than half illuminated. And if you look to the lower right of the moon, you’ll see a bright "star" shining with a steady, yellow-white glow. Except that's not a star, but the ringed wonder of the solar system, the planet Saturn.

Of course, the moon is nowhere near Saturn in terms of actual miles. The moon is 243,700 miles (392,000 kilometers) from Earth, but Saturn is 925.7 million miles (1.48 billion km) away. Or, put another way, Saturn is almost 3,800 times farther out in space than the moon. And yet tonight, both objects will be conveniently placed near to one another in our late August evening sky. The moon's placement in the sky relative to Saturn makes it quite easy for neophytes to identify this wondrous world. [Video: The Planets of August's Night Sky]

Both the moon and Saturn will be available for viewing until they set shortly after 11:30 p.m. local daylight time.

Without question Saturn is the showpiece of the night sky. Its famous rings can be glimpsed with a magnification of 30-power and currently they are tilted more than 24 degrees to our line of sight. The rings of Saturn consist of billions of particles are approximately fist-sized and made of – or covered by water ice.

The ancients regarded Saturn as the "highest" planet, occupying the outermost or highest sphere before that of the fixed stars.  When Galileo’s crude, imperfect "optick tube" revealed Saturn as having an odd pair of appendages or companion bodies on either side, he announced this discovery in 1610 with an anagram written in Latin. The jumbled letters could be transposed to read: Altissimum planetam tergeminum observavi ("I have observed the highest planet to be triple.") It wasn't until a half century later that telescope lenses improved to the point where the ringlike nature of these "appendages" became apparent.

Currently, Saturn is in the constellation of Libra, the Scales.  Since Saturn requires 29.5 years to orbit the Sun, its progress through the 12 zodiacal constellations is quite slow, averaging roughly 2.5 years per constellation. The last time this planet was located in Libra was in 1983.

Joe Rao serves as an instructor and guest lecturer at New York's Hayden Planetarium. He writes about astronomy for Natural History magazine, the Farmer's Almanac and other publications, and he is also an on-camera meteorologist for News 12 Westchester, N.Y.Follow us @Spacedotcom, Facebook and Google+. Original article on