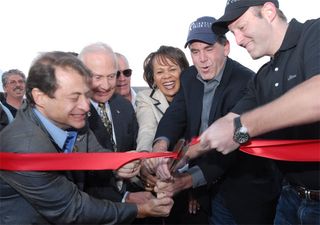 The cup was founded by the creators the Ansari X Prize, the $10 million prize package offered to anyone who could launch a re-usable sub-orbital spacecraft, capable of carrying passengers, twice in a two week period.

The prize was won on October 4, 2004 by SpaceShipOne, a revolutionary spacecraft designed by maverick aerospace engineer Burt Rutan and financed by Microsoft co-founder and entrepreneur Paul G. Allen.

Building on the success of that competition, the WireFly X Prize Cup was launched in 2005. The three-day affair involves plenty of roaring rockets, privately-built spaceships and cash awards.

The first rocket to fly at the Cup, a large silver rocket of Tripoli Rockets, shot into the sky, trailing a white contrail contrasted with the blue New Mexico sky. Tearing off its launch pad, the Tripoli rocket rose to high altitude to theapplause of crowds.

Becominga small dot in the sky, the rocket failed to produce a parachute. Arcing over,the rocket became, what one viewer called: "Lawn dart!" The rocket hit theground at high speed.

Aschildren of all ages crowded into the Cup, Rocketman Dan Schlund took to thesky boosted by rocket backpack. The deafening roar from his powerful rocket jetseclipsed the applause as Schlund blasted off.

"I tried to keep it straight" Schlund explained, "and I had just two seconds of fuel left," he said after touching back down from his over-the-runway flight.

Technicalsnags have held up the first flight of the Armadillo Aerospace's rocket, a participant in the Northrop Grumman Lunar Lander Challenge. The vertical takeoff and landing craft was tested onThursday, flying in tethered and untethered mode.

"Theyhad a great shakeout flight," said Bill Gaubatz, lead judge of the Lunar Landercompetition. "They have made some final adjustments and are ready to go today,"he told SPACE.com.

The Rocket Racing League took time today to announce that its first Mark-1 X-Racer will be known as the Thunderhawk.

The RocketRacing League (RRL) is an aerospace entertainment organization which combinesthe competition of racing with the excitement of rocketry.