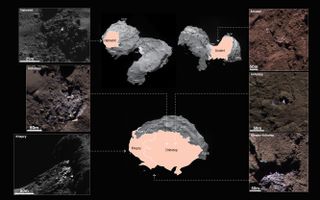 Images of six different patches on the surface of Comet 67P/Churyumov-Gerasimenko that show shimmering patches of what scientists think could be water ice. The middle inset shows the general region where each image was taken.
(Image: © ESA/Rosetta/MPS for OSIRIS Team MPS/UPD/LAM/IAA/SSO/INTA/UPM/DASP/IDA)

Patches of water ice appear to be speckled across the surface of a comet, according to a new study using observations from a European space probe.

The Rosetta spacecraft, currently orbiting Comet 67P/Churyumov–Gerasimenko, spotted 120 bright, reflective spots on the surface of the comet that were at least a few meters (about 6 feet) in size. While their composition is still being examined, the spots tend to appear in areas that are shaded by the sun, scientists noted. The researchers also note that there have been no significant changes to the spots after a month of observations.

"Water ice is the most plausible explanation for the occurrence and properties of these features," said Antoine Pommerol, a physicist at the University of Bern, in a statement. [Photos: Europe's Rosetta Comet Mission in Pictures]

"At the time of our observations, the comet was far enough from the sun such that the rate at which water ice would sublimate would have been less than 1 mm per hour of incident solar energy," said Pommerol, who is lead author on a study analyzing the bright spots. "By contrast, if carbon dioxide or carbon monoxide ice had been exposed, it would have rapidly sublimated when illuminated by the same amount of sunlight. Thus, we would not expect to see that type of ice stable on the surface at this time."

The spots are up to 10 times brighter than the average surface brightness of the comet, as measured by Rosetta. Sometimes they appear together, particularly when they are at the bottom of cliffs. The research team speculates this is because the cliff wall recently eroded or collapsed, revealing material below the dusty surface.

In other locations, bright spots have been observed alone. Scientists believe these instances represent objects that lifted off the surface when the comet's motion was more active. These objects, however, were not moving fast enough to escape the comet's gravitational pull altogether.

Comets are known to be rich in ices, based on observations of the trails they leave behind. When comets approach the sun, the heat of the star warms the comet's surface and causes the ice to melt. This process also releases dust clumped near the ice. But not all of the dust escapes, leaving the surfaces of comets very dark as the dust settles back on to the surface, or fails to leave in the first place.

It's not clear when the ice patches formed, but the team has two hypotheses. The first suggests that when 67P was closest to the sun, 6.5 years ago, cometary activity pushed the icy chunks into shadowed regions and protected them from the sun. Alternatively, perhaps carbon monoxide and carbon dioxide beneath the surface pushed the ice around while the comet was farther from the sun.

The team also did some tests in the lab to see what happens when water ice is combined with other minerals. When this ice is exposed to simulated solar illumination, a dust layer of a few millimeters thick is created, the researchers discovered. This thin layer could be enough to obscure the ice below on comets. But if a bigger chunk of dust is pushed aside by cometary activity, it would show off the ice below.

Results from the observations were published in the journal Astronomy & Astrophysics and are based on observations by the OSIRIS narrow-angle camera taken last September, one month after Rosetta arrived at the comet.