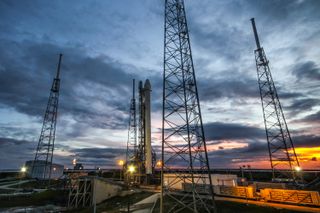 A SpaceX Falcon 9 rocket sits on the launch pad in September 2014.
(Image: © SpaceX)

The private spaceflight company SpaceX won't be flying its next delivery mission to the International Space Station until early 2015.

SpaceX was originally expected to launch its Falcon 9 rocket carrying an uncrewed Dragon cargo ship to the station for NASA today (Dec. 19), but the launch was delayed partly due to a problem with the rocket. SpaceX is now expected to launch its fifth official mission to the orbiting outpost under a contract with NASA on Jan. 6.

The Falcon 9 rocket poised to launch this week failed to finish a "static fire" test Tuesday (Dec. 16), a procedure where the rocket is secured to the ground and its engines are turned on for a few moments to test their performance. The company has not released any statements on what happened during the test, but CEO Elon Musk said more work is needed to get the rocket ready for launch. [The Spacecraft and Rockets of SpaceX: Photos]

The launch needs to be delayed several weeks not only due to the technical problem, but also because the sun will be at an unfavorable “beta-angle” for dockings to the space station. During this time, it's difficult to send spacecraft to the station because of heating and power concerns.

The new launch time "will provide SpaceX engineers time to investigate further some of the issues that arose from the static fire test of the Falcon 9 rocket on Dec. 16 and will avoid beta angle constraints for berthing the Dragon cargo ship to the station that exist through the end of the year," NASA officials wrote in a statement.

Should the launch go off as planned, SpaceX also hopes to land a stage of the rocket on a floating platform in the Atlantic Ocean. The company is hoping the unprecedented test will pioneer the use of reusable rockets to cut down on fuelling and launch costs in future missions.

"A fully and rapidly reusable rocket — which has never been done before — is the pivotal breakthrough needed to substantially reduce the cost of space access," SpaceX representatives said in a statement. "While most rockets are designed to burn up on reentry, SpaceX is building rockets that not only withstand reentry, but also land safely on Earth to be refueled and fly again."

The company has pledged to do a dozen launches in the next year, which will include several "testing opportunities" for this technology.