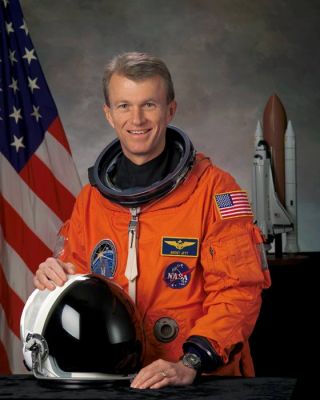 EXPERIENCE: Jett was designated a Naval Aviatorin March 1983, and reported to Fighter Squadron 101 at Naval Air StationOceana, Virginia Beach, Virginia, for initial F-14 Tomcat training. Uponcompletion of this training, he was assigned to Fighter Squadron 74 and madeoverseas deployments to the Mediterranean Sea and Indian Ocean aboard the USSSaratoga (CV-60).

After graduation in June 1989, he worked as a projecttest pilot at the Carrier Stability Department of the Strike Aircraft TestDirectorate, Naval Air Test Center, flying the F-14A/B/D, T-45A, and A-7E. Jettreturned to the operational Navy in September 1991 and was again assigned toFighter Squadron 74, flying the F-14B aboard the USS Saratoga (CV-60).

He has logged over 4,800 flight hours in more than 30different aircraft and has over 450 carrier landings.

After two years of various technical assignments inthe Astronaut Office, Jett was assigned to his first mission as the pilot ofSTS-72. A year later he again served as pilot on STS-81.

From June 1997 to February 1998, he served as NASADirector of Operations at the Yuri Gagarin Cosmonaut Training Center, StarCity, Russia.

Two years later he flew as the Commander on STS-97.A veteran of three space missions, he has traveled over 12.1 million miles, andlogged a total of 699 hours, 15 minutes and 57 seconds in space. Jett iscurrently assigned as the Commander of STS-115.

SPACE FLIGHT EXPERIENCE: STS-72 Endeavour (January 11-20,1996) was a 9-day flight during which the crew retrieved the Space Flyer Unit(launched from Japan 10-months earlier), deployed and retrieved the OAST-Flyer,and conducted two spacewalks to demonstrate and evaluate techniques to be usedin the assembly of the InternationalSpace Station.

STS-81Atlantis (January 12-22, 1997) was the fifth in a series of joint missionsbetween the U.S. Space Shuttleand the Russian SpaceStation Mir and the second one involving an exchange of U.S. astronauts. Infive days of docked operations more than three tons of food, water, experimentequipment and samples were moved back and forth between the two spacecraft.

STS-97Endeavour (November 30 to December 2, 2000) was the fifth American missionto build and enhance the capabilities of the International SpaceStation. STS-97 delivered the first set of U.S.-providedsolar arrays and batteries as well as radiators to provide cooling. Threespacewalks were conducted to complete assembly operations while the arrayswere attached and unfurled. A communications system for voice and telemetry wasalso installed.