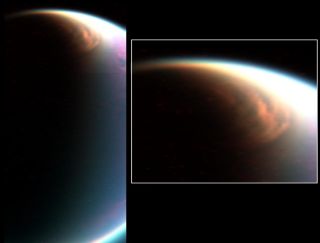 NASA's Cassini probe imaged a cloud in the stratosphere over the north pole of Saturn's moon Titan during a flyby in December 2006.
(Image: © NASA/JPL/University of Arizona/LPGNantes)

In a celestial surprise, NASA's Cassini spacecraft has identified a cloud of methane ice high in the stratosphere of Saturn's huge moon Titan.

"The idea that methane clouds could form this high on Titan is completely new," study lead author Carrie Anderson, a Cassini participating scientist at NASA's Goddard Space Flight Center in Greenbelt, Maryland, said in a statement. "Nobody considered that possible before."

Anderson and her colleagues spotted the methane cloud hovering over Titan's north pole in images taken by Cassini in December 2006, when it was winter in the moon's northern hemisphere. (The north is now shifting from spring into summer.) [Amazing Photos: Titan, Saturn's Largest Moon]

Researchers had seen methane clouds on Titan before, but in the troposphere, the lowest part of the moon's thick, nitrogen-rich atmosphere. While wispy clouds of ethane and several other materials have been observed in the stratosphere, this region had been regarded as not quite cold enough to support the existence of methane clouds. (Cloud formation requires colder temperatures at higher altitudes, because the air higher up contains less moisture, researchers said.)

This view was based on previous measurements taken just south of Titan's equator, which returned stratospheric temperatures of around minus 333 degrees Fahrenheit (minus 203 degrees Celsius).

But more recent Cassini data show that the stratosphere is patchy, with temperatures as low as minus 344 F (minus 209 C) in places, researchers said. And those frigid patches are cold enough for methane ice particles to form.

The methane cloud likely formed when relatively warm air rose to the stratosphere from the surface of Titan's southern hemisphere, where it was summer in December 2006, and then circulated up to the north polar region and sank back down, cooling as it went. Such a mechanism could produce methane clouds at altitudes ranging from 19 to 31 miles (30 to 50 kilometers), researchers said.

"Cassini has been steadily gathering evidence of this global circulation pattern, and the identification of this new methane cloud is another strong indicator that the process works the way we think it does," said Michael Flasar, also of NASA Goddard, principal investigator for Cassini's Composite Infrared Spectrometer instrument, in the statement.

Similar mechanisms are behind the formation of stratospheric clouds here on Earth, which is the only body in the solar system besides Titan known to possess bodies of stable liquid on its surface. Of course, Earth's weather system is based on water rather than hydrocarbons.

"Titan continues to amaze with natural processes similar to those on the Earth, yet involving materials different from our familiar water," said Cassini deputy project scientist Scott Edgington, of NASA's Jet Propulsion Laboratory in Pasadena, California. "As we approach southern winter solstice on Titan, we will further explore how these cloud formation processes might vary with season."

The new study was published last month in the journal Icarus.