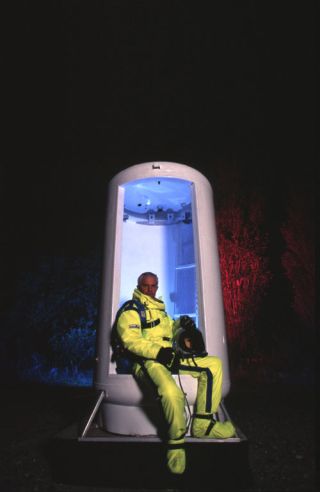 Fournier pictured with the small pressurised spacecraft that will protect him against UV rays and the tremendous cold. Totally controlled from earth, it contains the necessary oxygen, instruments of measurement and control, as well as flight data recording instruments including sound and image recording. Image
(Image: © Big Jump)

Frenchman Michel Fournier is readying himself and equipment to attempt a record-setting free fall from the stratosphere.

Dubbed "The Big Jump", Fournier is eyeing next month for his supersonic free fall from about 130,000 feet (40 kilometers)--roughly 25 miles above the Earth. The dive from a balloon-carried gondola is slated to take place above the plains of Saskatchewan, Canada.

The 62-year old Fournier is an experienced parachutist, pilot and former military officer. He hopes his ultra-sky dive will contribute to the development of future technologies and the safety of stratospheric flight--specifically by astronauts in high altitude emergencies that are outfitted with the proper survival equipment.

In September 2002 and then again in August 2003, Fournier's stratospheric high-dive over Canada was thwarted by weather and balloon problems. Over the last two year, The Big Jump team has worked on technical issues, ordering a new balloon, and awaiting the next inversion of jet streams over Canada this August.

If successful, Fournier will beat four world parachutist's records from the border of space:

Stepping out into thin air

There's history to be set and broken by Fournier.

On August 16, 1960, Captain Joseph Kittinger jumped into the record books after his dive from a height of 102,800 feet (31,334 meters). That jump set records that still stand today--the highest parachute jump, the longest freefall, and the fastest speed ever attained by a human through the atmosphere. But somewhat in contention was Kittinger's use of a small stabilization parachute during his record-setting fall.

In spotlighting the upcoming skydiving attempt, French astronaut, Jean-François Clervoy, explained that Fournier "will fulfill in a way one of my fantasies as an astronaut...which was always to 'walk back home' from space." He stated that Fournier is to be admired for the human dimensions of the solo exploit because he will be the only person onboard the gondola to ultimately decide to step out into thin air and take the gigantic step.