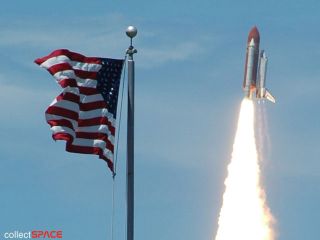 Space shuttle Discoverylaunched the seven-person crew of STS-121 to orbit today, and with them, eachtook personal items to make their 12-days in space (or five months, as in thecase of the soon-to-be space station resident on-board) a bit more like theirlife back on Earth.

The mission, NASA's 115thto be launched by the shuttle and the second test flight to follow the Columbia accident in 2003, carries in addition to the crew, 5,100 pounds of supplies andequipment for the International Space Station and new hardware to test shuttlesafety techniques and perform repairs to the outpost. Stowed aboard Discovery'smiddeck are also thousands of fruit flies for an experiment dedicated tounderstanding the human immune system.

Inside a separate locker isthe mission's Official Flight Kit, a collection of over 6,400 mementos beingflown on behalf of NASA, its partner contractors and countries, and theorganizations that have supported the crew of STS-121.

"I am carrying [insidethe Official Flight Kit] a banner from the Merchant Marine Academy, [and] Ibelieve, a hat from there," pilot Mark Kelly told collectSPACEduring a series of interviews conducted several weeks earlier with the crew."That's where I went to school as an undergrad. I am carrying stuff forthem."

Separate from the OfficialFlight Kit (OFK), each crew member can carry a "personal preferencekit," a small package of memorabilia for family and friends that NASAlimits to 20 items and 1.5 pounds each.

"Personally, [I amcarrying] stuff for my kids," said Kelly. "Some charms and stuff[for] my parents, my girlfriend, that sort of thing... mostlyjewelry."

For their schools, civicgroups and other groups, the crew members are each allocated a few items in theOFK.

"Some of the stuffactually belongs to [STS-121 mission specialist] Piers [Sellers]."If yousee the United Kingdom stuff in there, it's not me. I gave him some of myspots," explained Kelly.

Sellers, who was born inthe United Kingdom but is a U.S. citizen, has made local-U.K. headlines leadingup to the today's launch for taking with him flags from schools in England andScotland.

"I'm taking a fewlittle things for family and friends, and a few things for the training team,the guys who spent years preparing us for this mission and training us. And afew flags and emblems for other organizations. Nothing much, nothing that youcouldn't fit into a shoebox," Sellers told collectSPACE.

Collectors on the crew

Though the two women on thecrew consider themselves collectors, neither is carrying items from theirhobbies.

"I have a largecollection of rubber stamps," described first-time mission specialist LisaNowak. "I like to make cards with them and sometimes just play with them.My little girls recently found out there are all kinds artwork they can createwith them, not necessarily all on paper."

Asked if she was thereforeflying a rubber stamp with her to space, Nowak admitted to overlooking thatpossibility.

"That would have beena good thing! I didn't put down that on my list of things, but no I am nottaking one."

Instead, Nowak is takingwith her a more personal item.

"My grandmother died afew years ago at age almost 100, and one of the special presents she left to mewas her very beautiful engagement ring. I am taking that with me. That'sprobably one of the most treasured items that's going up there," shesaid.

"We are not allowed tobring any stamps to space, much to my dismay," said mission specialistStephanie Wilson.

Federal regulations for thepersonal preference kits (PPK) and OFK specifically preclude "items suchas philatelic materials and coins that, by their nature lend themselves to exploitationby the recipients."

Exploitation however, isfar from the reason why Wilson collects stamps.

"I started collectingstamps pretty young, I believe when I was eight," described Wilson. "I mostly collect stamps off letters that I receive. I usually don't go outand purchase stamps but I like to be able to tell a story about a stamp: itcame from this individual, on this card."

"So, it's probably notworth very much," continued Wilson, "but it's more sentimental thanprobably a pristine stamp collection. It's interesting to me to see the designsof the different stamps from the various countries."

Her stamp remaining onEarth, Wilson chose other items special to her, including a bible.

"I have a few personalitems for family members. From the Buffalo Solider Museum that is here in Houston, I am flying a flag commonly flown by one of the regiments of the Buffalo Soldiers,"she said.

Wilson is also carrying items from hergraduate school, the University of Texas, which is the subject of a goodnatured rivalry with mission specialist and Texas A&M University alumMichael Fossum.

Said Wilson, "We bothtry to have a lot of paraphernalia from our schools. In general, when [Mike's]performing a run in our pool in the Neutral Buoyancy Laboratory, he has abandana that has Texas A&M on it and so for different events, we'll havedifferent mementos or memorabilia from our schools.

"I think the pictureson orbit will be interesting as we bring out the various memorabilia. I am hopingthat none of mine will be missing and I am sure he's hoping none of his will bemissing as well," Wilson said.

Indeed, Fossum says hehopes that both his, and more importantly, Wilson's mementos stay in theirrespective control.

"I certainly have mymementos that I have tucked away and I know she does, too," Fossum told collectSPACE."I suspect we might both see a little of each others.

"My biggest fear isI'll be getting ready to go out the door for my spacewalk, and she's one of thepeople that will actually be helping me get into the suit and get to getprepared, and that she's going to do something like put a [University of Texas]Longhorn sticker on my forehead," joked Fossum. "I'll never live itdown."

Fossum will 'be prepared'for anything Wilson plans, as obtaining the rank of Eagle in the Boy Scoutstaught him. Still an active scout leader, he is flying badges that both he andhis son earned.

In addition to the tangibletrinkets, the crew is also taking electronic files that are personal tothem.

"We actually carryiPods now [so] I had my son put a lot of [music] on there for me,"Commander Steven Lindsey said. "I'm not really exactly sure what I have onthere. He promises that it is music that I am going to like but I've heard someof the stuff he listens to and I'm not sure I will. But fortunately, I hardlyhave any time to listen to it."

For European Space Agencyastronaut Thomas Reiter, the only STS-121 crewmember who will remain on thespace station after Discovery undocks, electronic archives mean the ability tocarry more for his five month mission than if he had been limited to hardcopies.

"I also had the chanceto take some personal items, most of it in electronic format. That is, by theway, also one of the big differences to my stay on-board the Russian spacestation Mir," Reiter told collectSPACE. "The music I had torecord on minidiscs and I had to take it up. Nowadays, everything can be put inelectronic form: music, electronic books, pictures of the family."

"And of course, I alsotake also some paper pictures, some patches from my military flying squadron,from my university, from my hometown with me."

In fact, most of Reiter'spersonal mementos weren't his to choose.

"My family prepared alittle surprise packet for me. Of course I don't know yet what is in it, it'salready stowed, so as soon as we get on orbit and it is unpacked, it will bequite interesting to see what they were thinking of and what they providedthere."