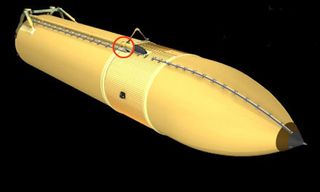 An illustration of Discovery's external fuel tank with the location of the crack circled in red. The crack runs between four and five inches long, and is between one-eighth and one-fourth of an inch wide.
(Image: © Lockheed/Robert Z. Pearlman)

CAPE CANAVERAL, Fla. - NASA inspectors have found a small crack in the foam insulation of the space shuttle Discovery's external fuel tank, prompting mission managers to discuss whether to press ahead with Tuesday's third launch attempt or stand down for repairs.

The crack is located on the topmost bracket connecting a 17-inch liquid oxygen feedline to Discovery's 15-story external fuel tank. The crack runs between four and five inches long, and between one-eighth and one-fourth of an inch wide.

Analysis is still underway to determine how deep it cuts into the foam insulation covering the shuttle fuel tank, NASA official said.

"We can get to that area if needed," NASA spokesperson Allard Beutel told SPACE.com. "They're discussing that now."

Marion LaNasa, a spokesperson for Lockheed Martin which builds shuttle external tanks for NASA, said that repairing the crack - or doing nothing at all - are among the options available for shuttle managers.

"Repair is an option, fly as is is an option," LaNasa said. "It is not rare to repair damage on the pad. It is more rare to roll back."

LaNasa said the external tank's liquid oxygen feedline is designed to flex during the fuel loading before a launch and unloading after a scrub. That flexibility, he said, allows the 17-inch feedline to handle the super-cold -297 degree Fahrenheit temperature of the liqid oxygen.

LaNasa and NASA officials did not comment on media reports citing that pad workers also found a piece of foam debris on the Mobile Launch Platform supporting Discovery and its launch stack for their planned space shot.

However, images obtained by the Orlando Sentinel and Florida Today, then analyzed by collectSPACE.com appear to show that the debris found by pad workers originated from the region of the tank's cracked foam [see animated image].

Shuttle fuel tank foam has been one of NASA's greatest concerns since the 2003 Columbia tragedy, in which a 1.67-pound chunk of foam insulation fell from a bipod ramp and breached the orbiter's left wing leading edge.

The resulting damage left Columbia vulnerable to the extreme temperatures of reentry, leading to its destruction and the loss of seven astronauts during their Feb. 1, 2003 Earth return.

NASA has since replaced that bipod foam ramp with a heater to prevent ice formation, but the newly discovered crack in Discovery's fuel tank is just above the right bracket that anchors the heated bipod - and the attached shuttle - to the tank.

Discovery's STS-121 mission is NASA's second shuttle flight since the Columbia accident. The space agency's first post-Columbia shuttle flight, STS-114 also aboard Discovery, launched in July 2005 and also experienced some insulation debris during liftoff though the one-pound piece of foam did not strike the orbiter.

A press conference is expected no earlier than 1:00 p.m. EDT (1700 GMT) after today's Mission Management Meeting to determine whether to fly Discovery as is with the crack, or repair the damage on the pad.