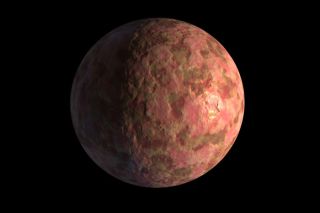 Sedna is a dwarf planet on the far outer reaches of the solar system.
(Image: © NASA.)

Sedna is a solar system body that is one of the most distant bodies found in our solar system. The object's closest approach to the sun is far greater than Pluto's distance away from Earth — at a spot where the sun is so tiny, according to NASA, that you could blot it out with a pin.

At 8 billion miles (12.8 billion kilometers) away, it's hard to figure out things such as surface features, but one thing astronomers have been able to identify is Sedna's distinct reddish color. In 2004, it was described as the second-reddest object in our solar system, after Mars.

Sedna was discovered by a team led by Mike Brown, an astronomer at the California Institute of Technology. The discovery of Sedna and other objects similar to it was a large impetus behind demoting Pluto from planetary status in 2006.

Brown's team found Sedna in 2003 as part of a larger survey of the solar system that began in 2001. Using the Samuel Oschin Telescope at the Palomar Observatory (east of San Diego) as well as Palomar's QUEST camera, the astronomers would take pictures of a tiny spot in the sky — one per hour for three hours — and see if they could find something that moved, Brown said in an explanation page about the discovery.

"The many billions of stars and galaxies visible in the sky appear stationary, while satellites, planets, asteroids, and comets appear to move. Objects in the inner Oort Cloud are extremely distant and so move extremely slowly," he said.

The Oort Cloud is a theorized area far in the solar system that is supposed to contain billions of icy objects that, if they receive a gravitational push toward the sun and warm up, turn into comets as the sun's energy melts the ice. Sedna, however, was much bigger than a comet. Estimates for Sedna's size vary, but it is believed to be slightly smaller than the size of Pluto (1,400 miles or 2,250 kilometers in diameter).[Related: New Horizons' Pluto Flyby: Latest News, Images and Video]

Sedna takes some time to orbit the sun, not only because of its vast distance but also because its orbit is so elliptical or oval-shaped. The small world takes roughly 10,000 years to complete one circuit around the sun. At the time of its discovery, it was at one of the closest points of its orbit to the sun, making it easier to spot.

Rise of the dwarf planets

Sedna was not the only object close to Pluto's size to be discovered in the early 2000s. Brown's team also found Quaoar, another dwarf planet candidate, and Eris. Eris was initially thought to be even larger than Pluto, prompting some to call it the solar system's 10th planet. (Later measurements showed that it may be smaller than Pluto, but at that distance and with its relatively small size, it's hard to say for sure.)

These discoveries spurred the International Astronomical Union to examine the definition of a planet in a 2006 meeting in Prague. The astronomers present voted that a planet 1) is a body orbiting the sun without being another object's satellite, 2) has a mass large enough to be nearly round, and 3) has cleared debris from its orbit. Dwarf planets, while also in orbit around the sun and mostly round, have not cleared debris from their orbits.

"Contemporary observations are changing our understanding of planetary systems, and it is important that our nomenclature for objects reflect our current understanding," the IAU said in a statement at the time.

"This applies, in particular, to the designation 'planets.' The word "planet" originally described "wanderers" that were known only as moving lights in the sky. Recent discoveries lead us to create a new definition, which we can make using currently available scientific information."

Sedna's orbit is extremely elongated, which is quite different from the circular planetary orbits that feature in our solar system. Brown told Space.com in 2011 that it was likely due to a close encounter.

"Somewhere in Sedna's history, it tells you about the formation of the sun and the history of the sun, and there's clearly information there. But here's the problem when you only have one [object like Sedna]: You don't know which of these many different ideas could be true."

In 2014, astronomers announced the discovery of 2012 VP113 (nicknamed "Biden") that is also believed to be in the inner Oort cloud. The new object's orbit is also extremely elongated, suggesting that perhaps the same thing perturbed both Sedna and 2012 VP113.