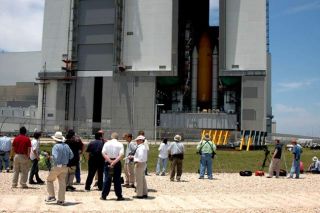 The crowd of photographers and journalists patiently wait for the first movement of the crawler to the pad with Space Shuttle Discovery.
(Image: © Larry Evans.)

During preparations for flight into space,the Space Shuttle goes through many transitions. Once the major components areindividually made ready for flight, they then all have to be brought together,or stacked, in the Vehicle Assembly Building (VAB) at the Kennedy Space Center.First the Solid Rocket Booster (SRB) segments are mated on top of each other onthe Mobile Launch Platform in one of the high bays of the VAB. Next, theExternal Tank (ET) is positioned between the twin SRB's.Finally, the Orbiter is secured to the back of the ET and everything is uprightand ready to roll to the launch pad.

A rollout can be an amazing thing to watch.It is the first time the full stack of the shuttle system sees the light of day,approximately four to six weeks prior to a scheduled launch.

The Crawler Transporter (CT) is drivenunderneath the launch platform and shuttle stack, thenlifts it off the VAB hard stand. At this point you have literally a full launchpad and space vehicle on the CT's back. This load weighs 12 million pounds.

The VAB high bay doors telescope upward, thecrawler's diesel engines are brought to life, the driver in his glass enclosedcab puts the monstrosity in gear and away it goes!

Okay, it might not be that dramatic sinceonce the CT is up to full speed that means they have achieved the lighting fastspeed of almost one mile-per-hour. For those of us watching the progress on thelawn area just outside the VAB, we have to watch closely to see when there isreal movement of the stack.

On the most recent rollout (Space ShuttleDiscovery on STS-121, now scheduled to lift off on July 1st at 15:48 EDT), thestart of rollout was delayed about 45 minutes, and then we had to watch closelyfor another 15 minutes or so before any of us could truly be sure that thismission was on its way. One mile an hour may be the top speed, but most of thetime it is much less.

The grey launch platform slowly moved out ofthe shadow of the VAB interior. Atop this we saw the back side of the shuttlestack: the ET and SRB's only. Hidden behind these isthe underside of the orbiter. A black triangle of thermal protection tiles oneach side of the SRB's is the first indication thatthe orbiter is even there as we see the outer tips of Discovery's delta wings.

Eventually, the CT and its load are outsidethe VAB structure and on their way to the launch pad.

River rock from Alabama provides the cushionon which this behemoth moves. The rock is crushed beneath the crawler as itrides on eight tracked tread belts, each with 57 one ton treads. Slowly movingpast us, more and more becomes visible. The beautiful white and black of theorbiter fully reveals itself, bolted to the spine ofthe External Tank.

The whole operation is fondly reminiscent ofchildhood memories of Gerry Anderson television shows like Thunderbirds. Theoperation is quite different than the way it is handled in Russia, where theboosters are transported on their side on a railroad car cradle, only to beswung vertically after arriving at the launch pad.

Many people ride along on the crawler'sjourney. When those of us on the ground spy someone on the launch platform nextto a booster, or standing below the tail of the orbiter, we truly get the scaleof what we are witnessing.

Getting out of the VAB is only the start. Forthose of us covering the event, our work day has just begun. Once the stack isheading down the 130-foot wide crawlerway, we lookfor other vantage points to record the progress. Eventually, we return twice tospecific points along the route. First at the wide turn the transport must makeas it moves to the specific launch pad chosen for this mission, and finally, atthe pad itself.

At the midway point, we drive to the viewingspot by going under the edge of the crawler. The rumble and power of thegigantic structure passes over our heads, the shuttle reaching into thecloud-speckled blue sky. The weight of the universe seems to bear down on us.Instinctively we duck, even inside the safety of our bus.

In position at the turn point, we watch inawe as the stack slowly makes its way toward us, and once again, over ourheads. How can such a huge mechanism even move, let alone transport an entirespacecraft and booster system across the miles of Florida swampland? It seemsincomprehensible.

The day draws to a close. The Sun is touchingthe horizon as we make our way to the final stop at the launch pad. Here theperimeter gates are pushed open by a large forklift, the CT moves inside, andstops long enough to level the towering vehicle as it prepares to traverse the5-degree incline to the top of the launch complex. Hydraulic jacks over threefeet in diameter raise or lower each end of the CT up to six feet, to keepeverything within a fraction of a single degree of level.

Inexorably, the CT inchescloser to the summit above the flame trench, where it will finally drop itsburden. Lights at the padcome up and provide pinpoints of illumination against the slowly darkening sky.

The last rays of the Sun disappear and thepurple sky serves as a backdrop for the final few feet as the Space Shuttleapproaches the point where the crawler comes to rest, gently dropping theplatform and stack onto the hard stand from where it will eventually takeflight. Then the CT itself backs away to head home to the parking area besidethe VAB. This round trip mission has been performed over 150 times during theApollo and Space Shuttle missions, and will probably continue for years to comeas the replacement for the shuttle eventually comes on line.

Total time on this 4.2-mile crawl to thelaunch pad was seven hours and forty-five minutes. A slow andarduous beginning to a journey that will culminate in a 17,500 mile-per-hourblast into Earth orbit to move humanity just a little closer to the stars.