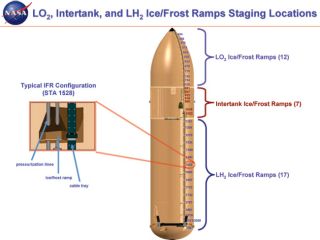 CAPE CANAVERAL - NASAAdministrator Mike Griffin responded at length this weekend to questions abouthis decision to go ahead with a July 1 shuttle launch despite the objections ofhis chiefs of safety and engineering.

This is a sampling of hisexplanation of the decision in his own words:

On foam debris risk: "I do not see this as being a crew loss situation. Ifwe are unlucky and we have a debris event on ascent, it will not impede theascent. The crew will arrive safely on orbit and then we will begin to look atour options, whether those include repair, launch on need, extended safe havenon the station, asking our Russian partners for help, or maybe some or all ofthe above.

"We would havedecisions to make, but we would have time to make those decisions. We are notin the situation that we were in with Columbia, where we did not know we had aproblem. We know we have a problem. We are electing to take the risk. We do notbelieve we are risking crew. There is a programmatic risk without doubt.

"If we have anothermajor incident launching a space shuttle, I would not wish to continue with theprogram. We are going to use this flight and the subsequent flights to completethe space station . . . We believe it is possible to do so. But if it is goingto be possible to do so, we are going to have to take some programmatic risksbecause the shuttle will be retired in 2010."

On his role in thedecision: "Advisersadvise. The administrator, whoever he is in whatever era, has the obligation todecide. That's what I do. We get a lot of advice internally from NASA to the program.The program and the mission director . . . have to at some level decide and . .. if the issue gets big enough, it comes up to me. (Other NASA officials) havethe right, have the obligation and have the utter necessity to tell us exactlywhat they think. But all of that is advice.

"No one else exceptfor the administrator is the administrator. And, fortunately or unfortunately,in this particular time, that is me. I am not trying to persuade people. I amtrying to listen as carefully as I can to everything that is being said to me.I try to integrate it all as best I can. I make a decision and then I explainto people what the rationale for that decision was because if I have any holesor flaws in my logic, I want to hear about them."

On dissent: "Some of the senior NASAindividuals responsible for particular technical areas, particular disciplines,expressed that they would rather stand down until we had fixed the ice-frostramps with something better, whereas many others said, 'No, we should go ahead.'

"So we did not haveunanimity. Therefore, a decision had to be made. Now, one possible way ofmaking decisions is that unless everybody feels that we should go, then we willstand down. In which case, I don't think for shuttle flights or any other flights,we don't need an administrator. We don't actually make decisions. We just makesure that no one is unhappy. That's not the method that were using."

Publishedunder license from FLORIDATODAY. Copyright ? 2006 FLORIDA TODAY. No portion of this materialmay be reproduced in any way without the written consent of FLORIDA TODAY.