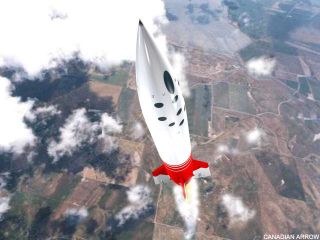 Canadian Arrow promises that passengers will experience acceleration of no more than 4.5 g.
(Image: © Canadian Arrow.)

Another contender in the private space race to win the $10 million Ansari X Prize will mark a milestone Saturday when they drop a rocket crew cabin into Lake Ontario.

The Canadian Arrow team, led by Geoff Sheerin of London, Ontario, hope to test the durability of human-carrying craft a well as run through water-based spacecraft recovery methods and prepare for upcoming test flights.

"This is a boilerplate crew cabin that will fly in space," Sheerin told SPACE.com, adding that the capsule may ride in an unmanned test. "No matter what happens, this is an important step."

The Ansari X Prize is an international competition among more than 20 teams around the world, all vying to be the first to build and launch a spacecraft capable of flying three people to 62 miles (100 kilometers) up, then do it again two weeks later with the same vehicle. The winner snags $10 million - only if successful before 2005 - and a trophy.

A successful April 15 test saw the Arrow's crew cabin plummet 30 feet (9.1 meters) from a crane and free fall into a harbor in Sarnia, Ontario. The impact, which occurred at about the same velocities expected in an actual flight, splashed into the water with just over five times the force of gravity.

Tomorrow's 9:00 a.m. EDT (1300 GMT) test, however, will demonstrate how the Canadian Arrow's cabin performs under a parachute. Team members hope the test will ensure their crew compartment won't tumble during descent or tangle in its parachute.

Sheerin's Canadian Arrow is modeled after the V-2 rocket, with a tested - reusable - engine capable of generating 57,000 pounds of thrust. Future, human-carrying flights are planned to launch up to suborbital space, where the crew cabin detaches from its booster, renters the atmosphere and parachutes to a safe splashdown.

"[We] understand the front end of the mission," Sheerin said of the launch challenges for Canadian Arrow. "Now we're making sure we understand the back end."

According to an announced flight plan, a helicopter will hoist the Canadian Arrow cabin up to a height of about 9,000 feet (2,743 kilometers) above a section of Ontario located south of Toronto Island Airport. At an altitude of about 8,000 feet (2,438 meters), the cabin is expected to deploy a single, 64-foot (19.5-meter) parachute to slow its descent to the waters of Lake Ontario.

Onboard computers inside the cabin's cockpit are designed to record position and impact deceleration to make sure none of the craft's motion - during the flight or landing - would be harmful for the team's astronauts.

Cameras mounted at astronaut eye level are also set to record the parachute deployment for use in training and a global positioning system (GPS) will track the spacecraft's drift in the water, team members said.

Splashdown is expected to occur five minutes after the cabin is dropped.

Once in the water, recovery crews - included London-based divers - will tow the craft by boat to the nearby National Yacht Club. The parachutes will be dried and repacked at the Canadian Arrow Space Center, a useful exercise to prepare team members for the two-week turnaround rules of the X Prize.

Sheerin said the test should prepare his team and spacecraft for a series of test flights over the next four months. The first flights, a series of escape system tests designed pull the crew cabin from its rocket housing during an abort, are planned to begin near the end of August.

"There's only about four or five tests left before human flights," he added.

Sheerin's drop test comes at the end of a full week of X Prize tests. An attempted test flight of Rubicon 1, an entry by the Washington-based team Space Transport Corp., ended in disaster after the spacecraft exploded during liftoff, spraying the area with debris and mannequin parts which were being used to simulate human passengers.

A separate, unmanned test by Armadillo Aerospace also ended with the destruction of its rocket prototype. Despite a smooth liftoff, the team's launch vehicle ran out of fuel almost 600 feet (182 meters) into the flight, careened Earthward and smashed into the ground.

"That's why they're called tests," Sheerin said, adding that his vehicle's crew cabin could suffer a parachute failure and crash blindly into Lake Ontario. "In this business, you do it in front of the eyes of the world."

Even full of water, the cabin should retain positive buoyancy and float, he added.

Last week, the Toronto, Canada-based da Vinci Project, now called the GoldenPalace.com Space Program, set a firm Oct. 2 launch date for their vehicle, the Wild Fire Mark VI. The all-volunteer team plans to launch Wild Fire from a high-altitude balloon above the town of Kindersley in the Canadian province of Saskatchewan.

Meanwhile, SpaceShipOne, a flight-tested front-runner developed by aerospace engineer Burt Rutan and his Mojave, California-based firm Scaled Composites, has scheduled the first of its two X Prize launches for Sept. 29.