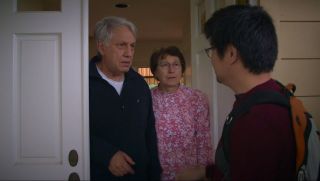 Theoretical physicist Andrei Linde, left, reacts to the news that cosmic inflation — a theory he played a major role in developing — has likely been confirmed.
(Image: © Stanford University)

No matter how impressed or intrigued you were to hear that researchers had found the "smoking gun" for the universe's incredible Big Bang expansion, your reaction cannot compare to that of Andrei Linde.

The Stanford University physicist appeared overwhelmed and on the verge of tears after learning that a team of astronomers had detected the signature of primordial gravitational waves — a key prediction of the theory of cosmic inflation, which Linde helped refine in the early 1980s after it was originally proposed by Alan Guth.

"We didn't expect anybody," Linde said in a video released Monday (March 17) by Stanford. "Renata [Kallosh, Linde's wife] said, 'It's probably some kind of delivery — did you order anything?' Yeah, I ordered it 30 years ago. Finally, it arrived!"

On Monday, a team of astronomers led by John Kovac of the Harvard-Smithsonian Center for Astrophysics announced that they had found direct evidence of gravitational waves in the cosmic microwave background, the ancient light that began saturating the universe about 380,000 years after the Big Bang.

If the new results hold up, they confirm that the universe did indeed undergo a period of incredible inflation just after the Big Bang, exploding from mere quantum fluctuations into something of macroscopic size in just a few tiny fractions of a second.

"If this is true, this is a moment of understanding of nature of such a magnitude that it just overwhelms," Linde said.

"I always leave with this feeling — what if I'm tricked? What if I believe in this just because it is beautiful?" he added. "So this is really helpful, to have events like that — it's really, really helpful."

Then Linde turned to Kuo: "Thank you so much for doing it."