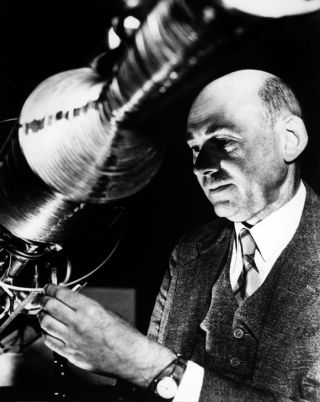 Dr. Robert Goddard, namesake for the Goddard Space Flight Center, works on one of his multi-stage rockets in 1932.
(Image: © NASA.)

In this historical photo from the U.S. space agency, the Goddard Space Flight Center was named in honor of Dr. Robert Goddard, a pioneer in rocket development. Dr. Goddard received patents for a multi-stage rocket and liquid propellants in 1914 and published a paper describing how to reach extreme altitudes six years later.

That paper, "A Method of Reaching Extreme Altitudes," detailed methods for raising weather-recording instruments higher than what could be achieved by balloons and explained the mathematical theories of rocket propulsion. The paper, which was published by the Smithsonian Institution, also discussed the possibility of a rocket reaching the moon — a position for which the press ridiculed Goddard. Yet several copies of the report found their way to Europe, and by 1927, the German Rocket Society was established, and the German Army began its rocket program in 1931. Goddard, meanwhile, continued his work.

By 1926, he had constructed and tested the first rocket using liquid fuel. Goddard's work largely anticipated in technical detail the later German V-2 missiles, including gyroscopic control, steering by means of vanes in the jet stream of the rocket motor, gimbal-steering, power-driven fuel pumps and other devices.