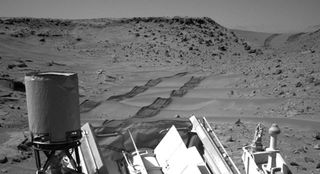 NASA's Curiosity Mars rover used the Navigation Camera (Navcam) on its mast to catch this look-back eastward at wheel tracks from driving through and past "Dingo Gap" inside Gale Crater.
(Image: © NASA/JPL-Caltech)

A new video shows NASA's Mars rover Curiosity playing dune buggy, clambering over a drift of sand on its way toward a big Red Planet mountain.

The Curiosity rover video, which is comprised of nine images captured by the robot's rear hazard-avoidance camera, shows the six-wheeled explorer climbing up and over a sand dune on Feb. 6.

"At the start of the drive, the rover's right-front wheel was already at the crest of the 3-foot-tall (1-meter-tall) dune, with the rover still pointed uphill," NASA officials wrote in a description of the video, which was released Tuesday (Feb. 11). "By the last three images in the series, the rover was headed downhill."

Curiosity crossed the dune to find a relatively smooth route to the foothills of Mount Sharp, which rises 3.4 miles (5.5 kilometers) into the Red Planet sky. Mission scientists want the robot to climb up through the mountain's lower reaches, reading a history of Mars' changing environmental conditions as it goes.

The 1-ton Curiosity rover landed in August 2012 to determine if the Red Planet could ever have supported microbial life. It has already answered that question, finding that a spot near its landing site called Yellowknife Bay was indeed habitable billions of years ago.

Curiosity departed the Yellowknife Bay area for Mount Sharp last July and is slated reach the mountain's base around the middle of this year, mission team members have said.

Topping the dune was a big milestone, and the rover notched another one shortly after leaving the feature in its rearview mirror — 5 kilometers (3.1 miles) traveled on the Red Planet surface.

The long haul to Mount Sharp should vault Curiosity past NASA's Spirit rover, which covered 4.8 miles (7.7 km) of Martian ground between 2004 and 2010. But Curiosity will have to keep roving for a long time to catch Spirit's twin, Opportunity, whose odometer reads 24.07 miles (38.73 km) and counting.

Opportunity, which is still alive and well, is the American record-holder for off-planet distance driving. But the overall mark belongs to the Soviet Union's remote-controlled Lunokhod 2 rover, which logged 26 miles (42 km) on the moon in 1973.