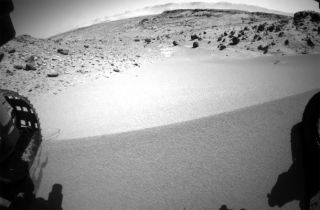 On Tuesday at precisely 12:55 p.m. EST (17:55 UTC), Mars rover Curiosity successfully breached the crest of the dune in “Dingo Gap.” The 1 meter-high dune stands between the rover and a smoother route to the mission’s next science target.

The raw image above comes from Curiosity’s front-left Hazard Avoidance Camera (or Hazcam for short) on sol 533 (Feb. 4) of the mission, providing a snapshot of the moment when the rover’s front left wheel reached the peak of the dune. Although there has yet to be official word from NASA Jet Propulsion Laboratory scientists, Curiosity appears to have conquered the upward slope of the Dingo Gap dune with ease. The timestamps on the raw imagery suggests the short drive up the sandy slope took around 25 minutes. [See an animated gif of the dune drive here]

During Curiosity’s careful approach, the incline of the dune was very clear in a raw photo from the rover’s mast-mounted navigation camera:

In the run-up to the “dune jump,” mission scientists were cautious to test out the sandy composition of the dune before committing the rover. Evidently, these preliminary observations proved that the dune is structurally sound and could support Curiosity’s six wheels.

Curiosity appears to have some to rest at the dune’s peak, probably admiring the view and assessing the drive down the dune’s slope and out of Dingo Gap. Hopefully the road ahead provides some smooth driving for the rover’s battered aluminum wheels.