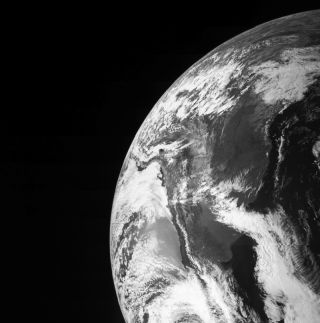 The Juno space probe caught this image of Earth during a flyby on Oct. 9, 2013.
(Image: © NASA/JPL-Caltech/Malin Space Science Systems)

When NASA's Jupiter-bound Juno spacecraft zipped around Earth earlier this month, it peered back at our planet for a photo op.

The $1.1 billion Juno mission, which launched in 2011, is taking a long circuitous route to the largest planet in our solar system. The space probe's flyby of Earth on Oct. 9 was intended to give it a speed boost from our planet's gravity and put it on the correct path toward Jupiter.

During this close encounter, the Juno probe snapped the Earth photo, which was taken by the spacecraft's JunoCam and released by NASA this week.

The 8,000-pound (3,267 kilograms) solar-powered spacecraft will arrive in Jupiter's orbit on July 4, 2016, and for a full Earth-year, it will study the gas giant's atmosphere, gravitational field and magnetic field.  Scientists hope the probe's observations will shed light on long-standing mysteries about Jupiter's composition, including whether or not the gas planet has a solid core.

Juno launched into space on Aug. 5, 2011 on an Atlas 551 rocket that lifted off from the Cape Canaveral Air Force Station in Florida. The spacecraft only had enough energy and speed to reach the asteroid belt, but Juno's Oct. 9 gravity assist from Earth accelerated Juno from a speed of 78,000 mph (126,000 km/h) with respect to the sun to a speed of 87,000 mph (140,000 km/h). Officials at the Southwest Research Institute in San Antonio, Texas, released a video of the Juno probe's Earth flyby to describe how this gravity boost works.

In its closest approach, Juno came within 350 miles (560 kilometers) of Earth on Oct. 9 at 3:21 p.m. EDT (1921 GMT). Shortly after the flyby, Juno encountered a mysterious glitch and entered safe mode, but the probe has since resumed normal operations, according to mission officials at the Southwest Research Institute.