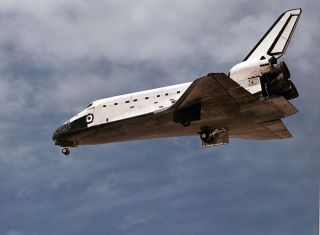 The Space Shuttle Atlantis returns after mission STS-30, landing at Edwards Air Force Base on May 8, 1989.
(Image: © NASA.)

In this historical photo from the U.S. space agency, the Space Shuttle Atlantis returns to Earth after mission STS-30 landing at Edwards Air Force Base, CA. at 3:43:38 EDT on May 8, 1989.