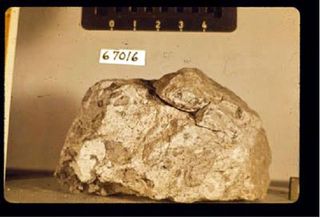 New dating of lunar rocks add to a growing body of evidence that the Moon and Earth were pelted by a flurry of large meteorites during a relatively brief geologic time span about 3.9 billion years ago.

Known as the "Late Heavy Bombardment," or LHB, this period of heightened meteorite activity would have had important implications for life on Earth, since it coincides roughly with the time that scientists think the first primitive bacteria appeared on our planet.

Researchers examined about 50 different melted rock samples collected by astronauts during the Apollo missions in the late 1960s and 1970s. Using radiometric dating techniques, they found that all but a few of the rocks were between 3.8 and 4 billion years old. Earth itself is about 4.5 billion years old.

Furthermore, many of the samples displayed different chemical "fingerprints," which suggests that they were formed from different meteorites and lunar rocks.

"The evidence is clear that there was repeated bombardment by meteorites," said study team member Robert Duncan from Oregon State University.

The NASA-funded study will be published in Geochimica et Cosmochimica Acta, the journal of the international Meteoritical Society.

All you have to do is look at the Moon to see that it has been hit hard. All the craters are a record of past impacts, and unless obliterated by a subsequent larger impact, the craters remain relatively intact because the Moon has no air to weather them and little internal activity like the volcanoes and earthquakes that constantly remake our planet.

Any meteorite activity that affected the Moon probably affected Earth as well, scientists say. But terrestrial evidence for the LHB is scarce.

"Unfortunately, we haven't found many very old rocks on Earth because our planet's surface is constantly renewed by plate tectonics, coupled with erosion," Duncan said.

In 2002, however researchers discovered in sedimentary rocks a version of the element tungsten in amounts not normally found on Earth. The tungsten is believed to be of extraterrestrial origin and was estimated to about 3.7 billion years old or older.

If the pockmarked surface of the Moon is any indication, early Earth was pelted by a fairly steady stream of meteorites--some as big as 6 miles or more across--for about 100 million years.

Any life that was present or developing on Earth at the time would have been in constant peril of being blasted out of existence.

It's possible that life emerged only after the bombardments slackened, or if it began earlier, it might have been disrupted or even reset by the intense hail of meteorites.

"Life might have taken refuge if it burrowed down into cracks or crevices or was at the bottom of the ocean," Duncan told SPACE.com. "But Earth would have been a miserable place to be alive. The Moon was bombarded pretty uniformly by this process, and it's hard to imagine that life, if it was established before this time [on Earth], could have survived through."

Another intriguing possibility, say Duncan and others, is that rather than being vehicles of death and destruction, meteorites carried life, or molecules important for the emergence of life, to Earth.

The cause of the LHB remains shrouded in mystery, but scientists have come up with creative explanations for what the triggering event might have been.

"We may have had a 10th and 11th planet that collided," Duncan said. "It's also possible that the outward migration of Neptune scattered comets and small planet bodies, inducing collisions in the asteroid belt. The close passing of a neighboring star could have had a similar effect."

Other scientists have speculated that the disruptive hijinks of a fifth terrestrial world called "Planet V" was responsible. This hypothetical planet is speculated to have formed alongside Mercury, Venus, Earth and Mars but then swallowed up long ago by the Sun.

Before it was destroyed, however, Planet V might have perturbed the inner asteroid belt between Mars and Jupiter because of its highly eccentric orbit. This could have caused a spike in the number of objects crossing the path of Earth and the Moon, the theory goes.

Another wild idea is that roughly 4 billion years ago, the orbits of Jupiter and Saturn entered into a synchronous resonance that threw off the orbits of the other planets and planet embryos, called "planetesimals," creating a temporary state of chaos within the inner solar system.

All of these scenarios are still highly speculative, however.