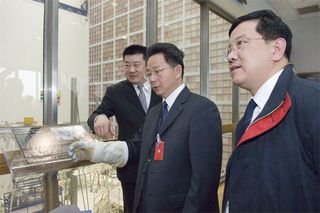 China is stepping up itsspace program, preparing to launch dozens upon dozens of Earth orbitingsatellites over the next five to eight years. Also being readied are severalspace science missions, fielding a new heavy-lift booster, as well asstrengthening its human spaceflight program to include an Earth-circling spacelab and initiating a multi-step program of robotic lunar exploration.

NASAAdministrator, Michael Griffin, has confirmed that he has been invited to visit China, although no specific date has been set for the meeting.

Howbest to work with China is increasingly becoming part of a space policy debatein the United States. The posturing between nations is reminiscent of Cold Wardiscussions with the former Soviet Union. Those talks led to an array ofcooperative ventures, from weather data exchanges to the docking detente ofApollo-Soyuz in 1975, setting the stage for working together on theInternational Space Station project.

"China civil space plans are ambitious and inevitable," said Joseph Fuller, Jr., President and ChiefExecutive Officer of the Futron Corporation based in Bethesda, Maryland. "It is not a question of if, but when. For the U.S. exploration vision to succeedon a grand scale, it must include China, India, Russia and other space faringnations," he said.

AsChina expands its automated and human spaceflight abilities, how best shouldthe United States look upon this blossoming work--from a military/civilianperspective? Denying NASA and U.S. space commercial vendors the right to work with China isa political, not a security issue, said James Clay Moltz, Deputy Director,Center for Nonproliferation Studies and Professor of International PolicyStudies at the Monterey Institute of International Studies in Monterey,California.

"Spacestation technologies are available from other suppliers and are unlikely tolead to any meaningful military advantages," Moltz explained. "On the otherhand, forcing China to develop its own space station with Russian or otherpartners simply sets up a possible competitor where there doesn't need to beone."

Moltztold SPACE.com that cooperating with China would defuse possible tensions,promote cost-savings for NASA, and level the playing field for U.S. companies. The United States should continue to hold China to account for human rightsviolations and other problems, but not hold space hostage. "It's simply not in U.S. interests," he said.

Givensuccess in the human spaceflight arena, Luo of CNSA said that his countryintends to orbit its own space lab by 2015. Leading up to this effort, headded, Chinese astronauts are to carry out space walks, with rendezvous andspace docking skills also to be demonstrated in coming years.

China carried out itsfirst human space voyage into Earth orbit in October 2003. That less-than-a-dayflight catapulted China into an elite club of countries that has this independentspace ability, following the former Soviet Union in 1961 and the United States in 1962. Last year, China sent a two-person crew into orbit on a five-daymission, substantially shaking out their Shenzhou spaceship.

Duringhis U.S. travels--including a stopover at NASA's Goddard Space Flight Center in Greenbelt, Maryland--Luo said his country will send a first robotic probe tothe Moon next year, make a soft-landing of a robotic rover on the Moon in 2012,and conduct an automated lunar sample return effort in 2017.

Therewas no direct mention by Luo of dispatching a crew to the Moon--or any timetable for such a feat--other than stating that he thought China will also consider the possibility of a manned mission to the Moon.

"Ihappen to believe that their goal is to get to the Moon and that their scheduleis probably more ambitious than ours is," said former Congressman Robert Walkerand now chairman of Wexler & Walker Public Policy Associates in Washington, D.C.

China's lunar desires will be seen bysome people as a very direct challenge, Walker said, "but for the Chinese itwill simply establish respect for their science and technology programs, whichwill then allow them, perhaps, to command a bigger price for a lot of theirproducts in the world market."

Walker told SPACE.comthat China's growing space prowess is "a very strategic kind of concept forthem," adding: "If we are going to be competitive in a world environment weneed to respect and do our job of anticipating and responding."

Interms of working with China on space matters, Walker said there is need for"more assurances" than the U.S. presently has about the Chinese willingness torespect technology, copyrights and patents.

"Wehave challenges with the Chinese at the present time because the rule of lawsometimes means different things to them than it means to us," Walker added. "We're trying to work that out through World Trade Organization arrangementsand hopefully some day we will."

Walker said thatU.S.-China space cooperation should be very carefully measured. There is needto assure that the United States, he said, doesn't end up giving Chinatechnology that challenges, and possibly exceeds, American space expertise.

Leadershipin space technology is a very important part of the United States beingcompetitive in the 21st century, Walker said. "We do not want to easily give upthe technology that allows us to stay in the lead."

MostAmericans think that the United States is so far ahead in the space arena thatno one will ever catch us, Walker concluded. "In my view, that's a mistake tobelieve that...because there are people with ambitions that rival our own."

InJanuary, China permitted several U.S. lawmakers to visit the Jiuquan Satellite Launch Center, an expansive complex that dots the desolate desert of Gansu Province. In 1970, China's first satellite rocketed into Earth orbit from thislocation. It is also home base for its budding human spaceflight program.

Purposeof the group, Feeney told SPACE.com, is to help disconnect a lot ofthinking in the U.S. House of Representatives from dated Cold War perspectives.Specifically, that today's China is equivalent of the Soviet Union 40 years ago-a perspective that is "just not true," he said.

"Inlarge parts of their country, the Chinese are a capitalist, poverty-eliminationmachine," Feeney observed. True, they have a long way to go on property rightsand civil rights, and other issues, he said, but the China of today is "aunique situation" among nations around the globe.

TheChina Working Group wants to look at China as it is today, based on real facts,not--as some people are incorrectly thinking--based on a Cold War vision, Feeneysaid.

Invisiting the Jiuquan Satellite Launch Center, Feeney said he was struck by boththe remoteness of the locale, as well as how modern their multi-floor rocket vehicleassembly facility was--taking on the appearance of a suburban office building.

Feeneyreiterated what other U.S. analysts have expressed. "In the United States, we're training our American aerospace engineers how to maintain 20 to 40year-old technology. The Chinese are literally developing new technology ontheir own."

Interms of the United States linking-up with China's space program in pursuingcooperative causes, Feeney advised: "There is a dramatic rethinking in thespace community and within NASA about the advantages of working with China."

Someten to fifteen years ago, China brought no added value to the space cooperationtable, Feeney said. But in very short order that has changed, with China making a commitment to space and now have proven capability that demonstrates theirtechnological wherewithal.

"Themost immediate thing we ought to agree to in my view is a joint dockingdevice," Feeney pointed out. Having the ability to dock NASA's Crew ExplorationVehicle (CEV) to a future Chinese space station should be considered. So too ishaving a Shenzhou spacecraft capable of attaching to a stranded CEV if need be,he added.

Butputting such ideas aside, Feeney said there remains a "big caveat in all ofthis." There are "very legitimate concerns" raised by the U.S. military, he said, about the ultimate intention of the Chinese.

"Soas we talk about cooperation, we have to think about the really big issues,"Feeney noted. "It's one thing to talk about human spaceflight ... rescue ofastronauts ... other types of technology generates this concern."

Askedwhat his take home messages were after viewing, in person, China's space program, Feeney said: "The Chinese have a long way to go to catch us in spacecapabilities. But they are very focused ... they have had huge success ... and theyare very dedicated to being a space leader."