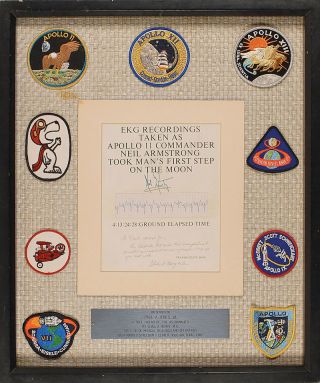 Astronaut Neil Armstrong's original electrocardiogram recording from the moment he stepped onto the moon in July 1969 is among the lots that were withdrawn from RR Auction's May 2013 sale.
(Image: © RR Auction)

The joystick controller used to steer the Apollo 11 spacecraft to the moon, the original recording of Neil Armstrong's heartbeat when he took humankind's first "small step" onto the lunar surface, and the complete tool kit carried on NASA's final manned moon mission won't be auctioned later this month, despite international headlines that heralded the rare space artifacts' sale.

RR Auction, a New Hampshire-based online auction house that specializes in autographs but has in recent years held space history-themed memorabilia sales, had featured the now-withdrawn Apollo-era artifacts in videos and releases issue to promote their current auction ending on May 23.

The rare moon memorabilia was pulled from the sale after NASA requested time to look into the artifacts' ownership, according to RR. The agency's general counsel wanted to insure that the items were no longer federal property. [NASA's Apollo 11 Moon Landing in Pictures]

"Every once in awhile we are asked to withdraw lots when ownership issues are brought to our attention," said Bobby Livingston, RR's executive vice president. "This happens in most collecting fields, and is not an exclusive issue in just the space artifact category."

"That being said, though we're disappointed, we're working with our consignors to provide additional provenance and clear title on these items," Livingston added.

Prior to their withdrawal from the auction, the Apollo 11 controller, Armstrong electrocardiogram (EKG) record and Apollo 17 toolkit had been promoted as some of the sale's star lots, leading off news stories published worldwide. [Neil Armstrong: An American Icon Remembered (Photos)]

The joystick, known as the rotation hand controller, was a part of the command module "Columbia" that flew Apollo 11 astronauts Armstrong, Buzz Aldrin and Michael Collins to the moon in July 1969.

"The premiere item of this auction is this Apollo 11 hand controller grip," Livingston said in a video released by RR in late April. "According to irrefutable evidence confirmed by our experts, this rotational hand controller would have been on the right side of the [command module's] couch, which would have been used by either Aldrin or Collins."

"It's awe inspiring because you can't get anything from the command module," he added.

NASA removed the controller and others like it from the spacecraft to be mounted for their post-flight presentation to the Apollo 11 crew, but the astronauts reportedly reneged. Instead, the joysticks sat inside a safe at Johnson Space Center in Houston until Bill Whipkey, head of the center's machine shop, was retiring and told to clean out the safe and throw out its contents.

Realizing the history he held in his hands, Whipkey took the joysticks home, where they were kept in a storage box until about 10 years ago.

RR's auction is the second time that the translational hand controller has been listed for sale. In April 2004, the same mounted joystick commanded a hammer price of $75,000. The winning bidder of that sale, which was organized by a California-based auction house, consigned the controller to RR to sell now.

The Armstrong EKG strip was also first sold in 2004 at the same auction as the controller, for a high bid of $12,000.

The six-inch long paper record of Armstrong's heartbeat at the moment of his historic "giant leap for all mankind" was retained by NASA's medical administration manager after the mission, cut into five pieces and then presented to the members of his medical team.

The Apollo 17 tool kit, believed to be the last complete set of moon-flown tools in existence, was first auctioned in May 2000, for a reported $35,000. RR listed the kit in its May 2012 auction, when it received bids of nearly $90,000 but it didn't sell, having not reached its reserve price.

The 16-piece tool set, which includes a crescent wrench, torque screwdriver and tether, was flown on the command module "America" in 1972. According to information found by RR after NASA requested the kit be held, NASA may have been released it from government property in 1982.

Had any of the three pulled lots come from an astronaut's collection, its sale would likely be proceeding now.

In September 2012, Congress passed legislation awarding the Apollo-era astronauts with title to their mission-saved mementos. The law came as a result of similar inquires by NASA into the astronauts' own attempts at auctioning their space-flown souvenirs.

RR's auction does include a number of lots consigned or originally from the Apollo astronauts' collections, including Apollo 13 pilot Fred Haise, Apollo 15 moonwalker David Scott and Apollo 17 commander Gene Cernan.

"There are over 800 lots in this auction, so there is an incredible amount of rare flown artifacts and some unique signed material," Livingston said. "These type of items do not come on the market often and this is your chance to add them to your incredible space collection."