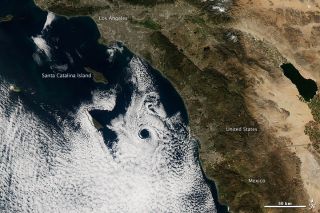 In the hot summer months, coastal Californians enjoy cooler weather than inland residents thanks to a cooling offshore vortex called the Catalina Eddy.

NASA's Aqua satellite snapped a picture of weather pattern from space on Feb. 17 as the winds swirled counterclockwise west of San Diego. Clouds form a bull's-eye over the ocean between the Southern California coastline and the Channel Islands. The eddy's namesake is Santa Catalina Island, the largest of the Channel Islands.

The Catalina Eddy forms when upper-level atmospheric winds interact with Southern California's rugged coastline and islands, according to NASA's Earth Observatory. The topography combines with offshore winds blowing from the north and coastal winds coming from the south to spin marine stratus clouds in a counterclockwise direction. The eddies most often form between April and October, peaking in June, the Earth Observatory said.