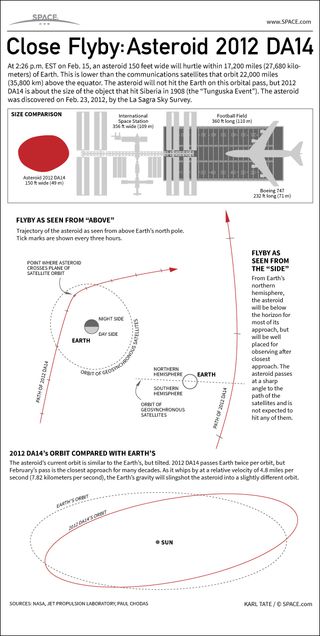 At 150 feet wide (49 meters), the asteroid is less than half the length of the International Space Station (356 feet wide, or 109 meters). It is about half the size of a football field.

From Earth's Northern Hemisphere, the asteroid will be below the horizon for most of its approach, but will be well-placed for observing after closest approach. The asteroid passes at a sharp angle to the path of the satellites and is not expected to hit any of them. [Asteroid 2012 DA14 Photos: Earth Flyby of Feb. 15, 2013]

The asteroid's current orbit is similar to the Earth's, but tilted. Asteroid 2012 DA14 passes Earth twice per orbit, but February’s pass is the closest approach for many decades. As it whips by at a relative velocity of 4.8 miles per second (7.82 kilometers per second), the Earth’s gravity will slingshot the asteroid into a slightly different orbit.