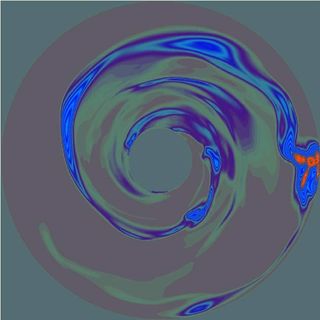 A computer simulation of a Jupiter-sized clump of matter swirling around a binary star system and on its way to becoming of a giant gas planet.
(Image: © Alan Boss/Carnegie Institution's of Terrestrial Magnetism)

The findings were presented here at the 207thmeeting of the American Astronomical Society.

Raghavan and his team combed through archived star data toidentify 131 star systems with planets that scientists had previously suspectedof having companion stars. They then used telescopes at the Cerro TololoInteramerican Observatory in Chile to confirm the results and to also look fornew systems with multiple stars.

The group found one previously unknown stellar companionaround HD 38529, a star known to have planets but until now was thought to be asingle star system.

Theorists have long wondered if such setups could occur,given the complex gravitational situations involved.

But in a separate new computer modeling effort, Alan Boss atCarnegie Institution's Department of Terrestrial Magnetism (DTM) and colleaguesdetermined that gas-giant planets like Jupiter can indeed form in binary starsystems in much the same way that planets form around single stars such as theSun.

"We tend to focus on looking for other solar systems aroundstars just like our Sun," Boss said. "But we are learning that planetarysystems can be found around all sorts of stars."

It was once thought that the strong gravitational forcesfrom stars in double star systems interfered with each other's ability to formplanets.

But the new theoretical model by Boss' team shows that ifthe gravitational force from one star in a double star system is weaker thanthe other, then gas-giant planets can form in much the same way as they doaround single stars.

In these theoretical systems, the whirling disks of dust andgas that form the starting material for planets could remain cool enough togrow into solid cores and form gas planets with masses thousands of times thatof Earth.

In this line of thinking, the planet-forming disk condensesinto dense spiral arms, within which the dust and gas clump together toeventually form planets. The process is believed to require less than 1,000years--much shorter than previously thought by many astronomers, though Boss hasfor years now been modeling similar brief time spans for giant planet formationaround single stars.

The model also suggests that there would be plenty of roomfor Earth-like planets to form close to the central star after the gas giantsfinished developing.

"This result may have profound implications in that itincreases the likelihood of the formation of planetary systems resembling ourown," Boss said.

That's because binary star systems tend to be rule ratherthan the exception in our galaxy. It's estimated that up to two out of everythree stars in the Milky Way are part of multiple star systems, many of thembinary. If such systems can shelter both outer gas giant planets as well asinner Earth-like planets, then the odds of finding habitable planet in distantstar systems would be increased by roughly threefold.

The team's findings will also be published in an upcomingissue of the journal Astrophysical Journal.