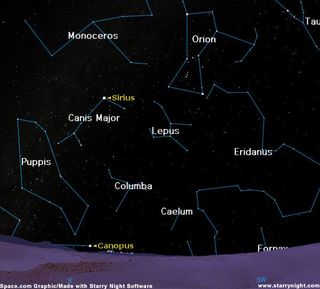 The sky from Faluja at midnight this time of year.

"Soldiers enjoy the sky much more here than in the states.  This time my wife sent me a telescope.  Now I am 7 hours ahead of EST.  If I add 7 hours to EST, can I expect to see in the sky all the data your website states?  I'm near Falujah. If things are different, is there any way you can add a section for Iraq?  Soldiers would use it."

We are most happy to oblige, Rev. Wallace.

It is not surprising that Military personnel currently stationed in Iraq (or Afghanistan) enjoy their views of the night sky.  Compared with much of the United States, where the lights from towns and large cities tend to obscure all but the brightest of the stars, there is very little such light pollution in Iraq and Afghanistan.  On most clear nights, the night sky can be seen in its full glory.

From many localities in the Middle East, the sky can appear truly black. In the summertime, for example, the Scorpius and Sagittarius region of the Milky Way casts obvious diffuse shadows on the ground.  Any clouds in the sky are visible only as dark holes in the starry background.  And if you're are out on a wide-open area, your companions and vehicle are almost totally invisible.

In contrast, those locations that are severely handicapped by light pollution - the Greater New York Area, for example - see far, far less of the night sky.  For those who live in the immediate suburbs, the only celestial objects that really provide pleasing telescopic views are the Moon, the planets, and a few of the brightest star clusters (if you can find them).

From the heart of New York City you should consider yourself very lucky to see more than 15 stars at any one time!

Iraq and Afghanistan are located roughly near and along 35º north latitude.  There the night sky will pretty much match what can be seen from places like Los Angeles, Albuquerque, Oklahoma City or Memphis, at least in terms of the locations of stars and planets that are visible.

Currently, during the late evening hours, Orion and his retinue of bright winter stars are spectacularly arrayed across the southern part of the sky.  Sirius, the brightest of all the stars and shining with a distinct bluish tinge, can be found at its highest, due south right around midnight.  And almost directly below Sirius and down close to the horizon, look for the yellowish-white Canopus, second only to Sirius in brightness, but a star too far south to be seen for most of the northern United States. [Sky Map from Faluja]

The early part of February through late March, from about 1½ to 2-hours after sunset, is the best time to look for the zodiacal light, a faint glow stretching up from the western horizon.  It somewhat resembles a giant slanted pyramid and can sometimes appear to extend more than halfway up into the sky; its color can be seen as distinctly yellowish when compared with the blue-white of the Milky Way.

The zodiacal light is caused by sunlight reflected from meteoric dust lying in the plane of the solar system and extended far out beyond our Earth. It's a striking sight from dark, starry skies, though rarely, if ever seen anymore from brightly-lit towns and cities.

Just for Iraq and Afghanistan

Here are some sky highlights that soldiers stationed in the Middle East will be able to see, that will not be available to the folks back home:

Occultation of the Pleiades.  Two good opportunities to watch the Moon cross in front of this famous star cluster come in 2006.  The first comes on March 5, right after sundown with a lovely crescent Moon, the other during the late evening hours of September 12 involving a waning gibbous Moon.  View the March 5 event as it will look from Faluja, or click here for more details.

Partial Eclipse of the Sun on March 29. The path of totality for this solar eclipse will stretch from eastern Brazil, across Northwest Africa, ultimately ending over western Russia. For Afghanistan and Iraq, this will be a partial eclipse.  From Kabul, the eclipse will run from 3:14 p.m. (local time) to 5:09 p.m.  At maximum, the Moon will cover 41 percent of the Sun's diameter.

From Baghdad, a more substantial eclipse will be visible, beginning at 12:57 p.m. and continuing until 3:24 p.m.  At maximum (2:12 p.m.), nearly 63 percent of the Sun's diameter will be covered.  SPACE.com will have more details on the eclipse as we get closer to this event.