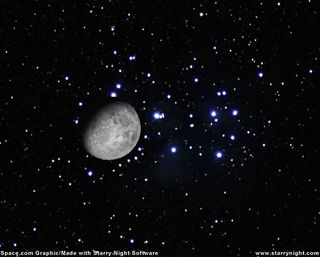 How the Jan. 9 occultation will look at around 10 p.m. as seen from New York. The view will be different from each location.

During the next several years, skywatchers around the globe will periodically get a chance to watch the Moon pass in front of the most beautiful of all star clusters, the Pleiades. It will happen thirteen times in 2006 alone, beginning in January.

The easy-to-view events provide an excellent excuse to pull an old telescope out of the closet or buy a new one.

Astronomers refer to this phenomenon as an "occultation," taken from the Latin word occult?re, which means, "to conceal."  In most cases, the Moon will hide a bright star or planet, but by passing in front of a cluster of stars like the Pleiades, many stars will be occulted within a span of a few hours.

Few star figures are as familiar as the Pleiades, known also as the Seven Sisters.  Anyone having difficulty in recognizing various stars and constellations should start with this star pattern. This group looks at first glance to the naked eye like a shimmering little cloud of light.

But further examination will reveal a tight knot of 6 or 7 stars, though 11 or more have been recorded under excellent conditions.  In long-exposure photographs, several stars in the cluster seem to be enveloped in clouds of dust, perhaps left over from the stuff of which they were formed.  About 410 light-years away and some 20 light years across, the group may be no older than 20 million years.  About 250 stars have been identified as members of this cluster.

The brightest stars glitter like an array of icy blue diamonds on black velvet.  Or, as Tennyson wrote, they "glitter like a swarm of fireflies tangled in a silver braid."

It should also be noted, that in most cases, using binoculars or a telescope you'll likely be able to watch perhaps up to several dozen occultations of the fainter stars in this cluster within a few hours.

In the table, below, is the complete list of Pleiades occultations through 2006, which will chiefly favor locations over the Northern Hemisphere.  Note that each occultation will be visible only for a specific region of the Earth.  In other areas, either the Moon will appear to miss the cluster or the event occurs during the daytime or when the Moon and Pleiades are below your local horizon.  Even if your area is not in a favored position to see an occultation, you'll still see the Moon and the Pleiades rather close to each other on the date in question. The date and universal time (U.T.) are given for the midpoint of each event.  To convert to your time zone, keep in mind that U.T. that you will need to subtract five hours for Eastern Time, six hours for Central Time, seven hours for Mountain Time and eight hours for Pacific Time.  When daylight saving time is in effect, subtract four hours for Eastern Time, five hours for Central Time, etc.

Also important: In some cases, after converting to your time zone, make sure you check to see if the occultation occurs on the previous calendar day.  For example: 2006 April 2 at 01h U.T. converts to 2006 April 1 at 20h (9:00 p.m.) Eastern daylight time!

The very best Pleiades occultations will be those involving a crescent Moon, where the Moon's light is not overly bright.  In addition, Earthshine may also be evident as a faint grayish-blue illumination of the dark part of the Moon's disk.  This dim light is produced by sunlight striking the "dark" side of the Moon after first being reflected from the Earth's surface, clouds and atmosphere.  This effect will give the Moon an almost 3-D quality and will only serve to enhance the overall view.  The April and July occultations which favor eastern North America, should be especially striking and Night Sky will provide detailed outlooks as we draw nearer to both of these events.

Occultations of the Pleiades for the upcoming year: