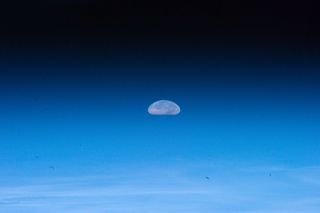 The Aug. 1, 2012, full moon appears squashed due to distortions by Earth's atmosphere in this photo by an astronaut on the International Space Station.
(Image: © NASA)

Night sky observers around the world will have the chance to see a special full moon — one that has been dubbed a "blue moon" — this Friday (Aug. 31). But, even those who are thwarted by less-than-ideal conditions outside will be able to tune in online to see spectacular lunar views.

The web-based Slooh Space Camera, which showcases live views from various telescopes around the world, is hosting a special broadcast of the blue moon on Friday, beginning at 6 p.m. EDT (2200 GMT).

Slooh's program will feature live shots of the moon from an observatory in the Canary Islands, off the coast of Africa, and views of the sun from the Prescott Observatory in Arizona. The dual feeds will treat viewers to simultaneous real-time observations of the moon and sun in true color, Slooh officials said.

The broadcast will also pay tribute to the life of astronaut Neil Armstrong, the first man to walk on the moon. Armstrong died on Aug. 25 at the age of 82, following complications from heart surgery.

"This Blue Moon that Slooh will explore Friday night is somewhat rare, but not as rare as the courage and talent of the late Neil Armstrong, the first human to set foot on our nearest celestial neighbor," Berman said in a statement. "To honor him, Slooh will explore the Sea of Tranquility with its Canary Island 20-inch telescope, live, and have guests who will reveal some of the lesser-known secrets of that historic 1969 event. I think many of our visitors will be in for quite a surprise."

The blue moon webcast can be accessed by visiting the Slooh Space Camera's website here: http://events.slooh.com/

Viewers can also tune in on their IOS or Android mobile devices, according to Slooh officials.

This week's blue moon will be the last one visible until July 2015, Slooh officials said. Interestingly enough, the term "blue moon" does not refer to the moon's color, but rather has to do with it being the second of two full moons within the same calendar month.

The definition of a blue moon, as we use it today, was actually the result of a mistake. Long ago, the term "blue moon" was used to describe absurd happenings.

In 1946, amateur astronomer James Pruett misinterpreted the term as it was used in the Maine Farmers' Almanac. Pruett penned a piece for Sky & Telescope magazine with the incorrect assumption that a blue moon refers to the second full moon of a month with two (rather than the third full moon in a season that has four of them, as was written in the almanac).

The first full moon of this month occurred on Aug. 1. Typically, blue moons occur every 2.7 years, and while they do not differ much from other full moons, the lunar views on Friday should serve as a fitting tribute to the legacy of Armstrong and the Apollo program.

If you snap any good photos of Friday's full moon and would like them to be considered for a future story or gallery, please send them to SPACE.com assistant managing editor Clara Moskowitz at cmoskowitz@space.com.