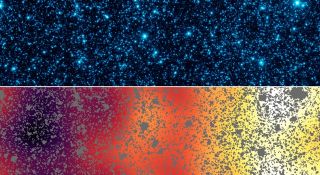 Astronomers have uncovered patterns of light that appear to be from the first stars and galaxies that formed in the universe. The light patterns were hidden within a strip of sky observed by NASA's Spitzer Space Telescope.
(Image: © NASA/JPL)

New observations from a NASA space telescope have spotted what may be the very first objects created in the universe in unprecedented detail, scientists say.

The faint objects, imaged in infrared light by NASA's Spitzer space telescope, might be hugely massive stars or black holes, but are too distant to see individually.

The Big Bang is thought to have kick-started the universe about 13.7 billion years ago. At first, the universe was too hot and dense for particles to be stable, but then the first quarks formed, which then grouped together to make protons and neutrons, and eventually the first atoms were created. After about 500 million years, the first stars, galaxies and black holes began to take shape.

The scientists can't confirm for sure that the objects they see date from the early universe, but say that's the most likely explanation.

"These objects would have been tremendously bright," Alexander "Sasha" Kashlinsky of NASA's Goddard Space Flight Center in Greenbelt, Md., said in a statement Thursday (June 7). "We can't yet directly rule out mysterious sources for this light that could be coming from our nearby universe, but it is now becoming increasingly likely that we are catching a glimpse of an ancient epoch."

Spitzer spotted these ancient structures after observing two patches of sky for more than 400 hours each. The telescope sees in infrared light, the long-wavelength range of the electromagnetic spectrum that's less energetic than optical light. [Infrared Pictures from the Spitzer Space Telescope]

The researchers first removed all known stars and galaxies from the images. What was left over showed lumps of structure in a pattern consistent with how very distant objects are thought to cluster together.

The light spied by Spitzer has probably traveled for billions of years to reach us. It would have started out as optical or ultraviolet light, but over time stretched until it became infrared.

While Spitzer, which launched in 2003 and orbits the sun in an unusual Earth-trailing path, has made inroads in observing these objects, scientists are waiting for the James Webb Space Telescope to make major progress in understanding them.

James Webb, billed as the successor to the Hubble telescope, is an $8.8 billion infrared observatory due to launch in 2018.

"This is one of the reasons we are building the James Webb Space Telescope," said Glenn Wahlgren, Spitzer program scientist at NASA Headquarters in Washington, D.C. "Spitzer is giving us tantalizing clues, but James Webb will tell us what really lies at the era where stars first ignited."

The researchers report their findings in a paper in The Astrophysical Journal.