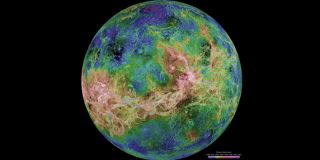 Venus, the second planet from the sun, is an oddity in many ways.

With this week's ultra-rare transit of Venus, in which the planet will pass in front of the sun as seen from Earth on Tuesday (June 5), we here at SPACE.com think it's a great time to take a look at the peculiar quirks of one of our closest neighbors in the solar system.

Here are the top five ways we think Venus is weird:

There are more volcanoes on Venus than on any other planet in the solar system.

Astronomers know of more than 1,600 volcanoes on its surface, but there are likely many more too small for us to see. Scientists think most of these are dormant, though a handful may still be active.

A day on Venus lasts 243 Earth days (that's how long it takes Venus  to make one rotation), while a year on Venus (its revolution period around the sun) is shorter, at just 224.7 Earth days. If that's just one day, think about what a work week would be like!

Because the bulk of its atmosphere is made of carbon dioxide, an extreme greenhouse effect is warming the surface of Venus. Temperatures on the surface can reach a scorching 870 degrees Fahrenheit (470 degrees Celsius).

"The surface is hot enough to melt lead due to its runaway greenhouse atmosphere," Sue Smrekar, a scientist at NASA's Jet Propulsion Laboratory in Pasadena, Calif., said in a statement.

Russian spacecraft, the Venera probes, have actually landed on the surface of Venus and beamed back amazing images of the harsh terrain at ground level, but the the extreme heat, pressure and other harsh conditions meant the probes did not last long after landing.

Winds howl across Venus at super-fast speeds that can reach 450 mph (724 kph) in its middle cloud layer. These Venusian winds are faster than the speediest tornado on Earth, scientists say.

Astronomers say the winds of Venus blow so fast they cause a so-called "super-rotation," which can drive clouds around the entire planet in just four Earth-days.

Editor's note: If you snap a great photo of the Venus transit and would like to share it with SPACE.com for a story or gallery, please send images and comments to SPACE.com managing editor Tariq Malik at tmalik@space.com.