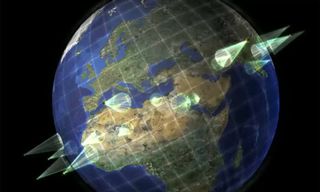 Enemy fighters use commercial satellite images to plot attacks on U.S. troops, but most U.S. soldiers can't get the same images because of technical or classification restrictions. The Pentagon says that problem can be gotten around through swarms of small satellites capable of providing on-demand battlefield images for any U.S. soldier with a tablet.

Two dozen disposable satellites could be launched from aircraft-fired missiles for a fraction of the cost of the flying robots that make up the U.S. military's drone fleet. The complete constellation of 24 satellites would hold orbit for at least 45 days and send updated battlefield images to soldiers on the ground within an hour and a half of receiving a request, according to a solicitation issued by the Defense Advanced Research Projects Agency May 9.

The U.S. military already has thousands of flying robot drones covering the battlefields, but DARPA's "SeeMe" program envisions satellite swarms providing much wider coverage and constant surveillance from space. That could allow even ordinary soldiers to request the latest battlefield images during a patrol or firefight, as seen in a newly released DARPA video.

DARPA says success of the project depends not only on getting satellites that are far less expensive than drone aircraft, but on finding a manufacturer that can make them within 90 days of the U.S. military's demands. At present, the military must wait a year or two for delivery of new satellites.

DARPA has set a test goal of launching 24 small satellites into orbit around 2014 or 2015. That first swarm is expected to have a price tag of $12 million, not including launch or operational costs.