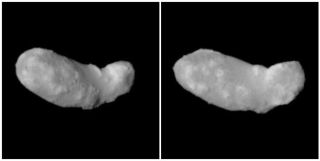 Hayabusa's view of asteroid Itokawa. The Japanese space probe has closed in on the object. Future objective of the spacecraft is to sample the asteroid and then return those specimens back to Earth.
(Image: © ISAS)

The Japanese space probe Hayabusa has approached within 12 miles (20 kilometers) of its target, asteroid Itokawa (1998 SF36).

Scientists at Japan's Institute of Space and Astronautical Science (ISAS) have been monitoring the day-by-day closing in on the asteroid by their craft. ISAS is a research arm of the Japan Aerospace Exploration Agency (JAXA).

ISAS scientists report that images taken by Hayabusa show a contrast of rocky and hilly regions and a smooth area on the asteroid. Further analysis of the imagery and other data may help decipher the origin and evolution of the asteroid.

The plan is for Hayabusa to depart Itokawa carrying onboard samples of asteroid Itokawa, and then head back to Earth. The probe's sample return canister would parachute back to Earth in June of 2007.

There are four major space engineering tasks in the Hayabusa mission: electric propulsion, autonomous navigation, collecting samples from an asteroid, and returning those specimens to Earth.

The touchiest and most difficult aspect of the mission is clearly gathering asteroid samples. The spacecraft will descend by autonomous adjustments of its propulsion engine -- while transmitting images of the whole process to Earth.

Due to spacecraft's distance from Earth and the communications lag -- some 10 minutes -- most of the essential decisions have to be made by the spacecraft itself.

According to ISAS updates on the mission, the spacecraft will release a target marker onto the asteroid. This small marker is to glow brightly on the asteroid's surface, reflecting light from a flash beam transmitted from the spacecraft. The probe uses onboard gear, including a laser ranging device, to descend to the asteroid.

After making a close approach to the asteroid, and prior to a final touch down, the spacecraft is to stop using its propulsion engine and then enters into a free fall descent. This is to prevent the steering jets on the probe from contaminating the asteroid's surface.

From this point, the engine stays halt until the completion of sampling. After the free fall descent, sampling starts as soon as the landing of a sampler horn on the asteroid surface is detected. Right after sampling, the spacecraft starts the engine, immediately lifts off, and resumes its hovering position above the asteroid.

If successful, Japan's Hayabusa mission would be the first spacecraft in history to return samples from an asteroid.