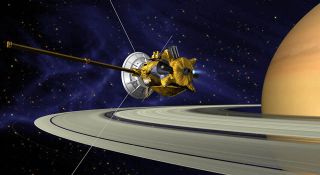 A former NASA employee who was fired last year is suing the space agency, claiming he was let go because he believes in intelligent design, according to news reports.

The employee, David Coppedge, was a computer specialist at NASA's Jet Propulsion Laboratory in Pasadena, Calif., and served as team leader for the Cassini orbiter mission around Saturn. He was demoted in 2009, and eventually lost his job in 2011, after 15 years of working on the mission.

Coppedge is now claiming he was wrongfully terminated, based on the fact that he talked to co-workers about intelligent design and passed out DVDs espousing the philosophy at work.

Intelligent design is the idea that life is too complicated to have arisen through chance and evolution, and must have been created by an intelligent force, such as God. Many science organizations, such as the National Center for Science Education, classify intelligent design as a religious belief rather than a scientific theory.

"In an emailed statement, JPL dismissed Coppedge's claims," the Associated Press reported. "In court papers, lawyers for the California Institute of Technology, which manages JPL for NASA, said Coppedge received a written warning because his co-workers complained of harassment."

Caltech claims Coppedge was let go because of budget cuts, according to the AP.

Proponents of intelligent design, such as the Christian civil rights group The Alliance Defense Fund and the Discovery Institute, are supporting Coppedge's case.

"Coppedge's attorney, William Becker, contends his client was singled out by his bosses because they perceived his belief in intelligent design to be religious," the AP reported. "Coppedge had a reputation around JPL as an evangelical Christian, and interactions with co-workers led some to label him as a Christian conservative, Becker said."

Coppedge claims other issues led to his dismissal as well, such as his opposition to gay marriage and his push to officially call the JPL holiday party a Christmas party, according to the lawsuit.