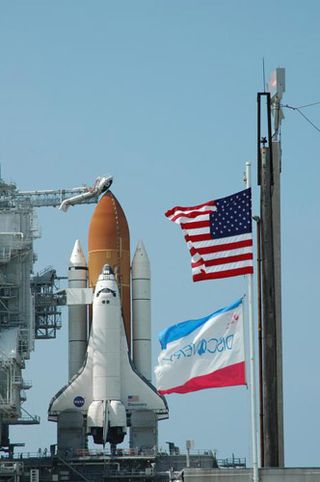 CAPE CANAVERAL, Fla. - For thesecond time in two weeks, NASA is just hours away from launching the spaceshuttle Discovery, the agency's first space shuttle to fly since the Columbiacatastrophe.

"We've gone through so much in thelast couple of weeks, and it's discouraging," Discovery's vehicle managerStephanie Stilsontold SPACE.com. "It's impossible notto be discouraged when something you've been working for is postponed."

But today is a different story.

"It's going to be an very exciting time,"astronaut Dave Wolf said of Discovery's second launch attempt, adding thatwhile attention may have dropped after Discovery's first scrub, today's launchwill be sure to make a mark. "The eyes of the world are going to be on KSC."

Mission managers believe that the extensiveinvestigation into the fuel sensor glitch over the last two weeks has giventhem a good understanding of the anomaly, even if they still cannot fullyexplain it. During that time, pad engineers found and addressed wiringgrounding issues inside the orbiter's ECO sensor electronics box, tested andretested potential sources of electromagnetic interference and rewired two ofthe ECO sensors - No. 2 and No. 4 - to better isolate the glitch should itoccur again.

Two additional tests, spaced outthroughout the countdown, should verify the sensors' performance, NASAofficials said. The first will take place about 30 minutes after pad engineers begin loading the external tank with its cryogenic fuel. A second test is scheduled during a planned countdown hold at T minus 9 minutes, NASA officials said.

Mission managers have even drawn up plansto launch Discovery should the sensor glitch pop up again, so long as it doesso according to specific guidelines which have been discussed exhaustively.

"I think we're all struggling withthe ghost of Columbia," said Wayne Hale, deputy program manager of the shuttleprogram, during a pre-launch briefing late Sunday. "We want to do it right."

The family members of the astronautslost aboard Columbia, as well as relatives of those astronauts lost in the 1986Challenger disaster, are expected to attend today'sspace shot, NASA officials said. Other dignitaries include First Lady LauraBush, Florida Gov. Jeb Bush and family, Gen.Forrest McCartney - a Columbia accident investigator, as well as artist BarbaraErst Prey, Congressman Dave Weldon (R-Florida) andSen. Tom Feeney (R-Florida) and others.

NASA has spent the last two and ahalf years working to address its internal culture and return its threeremaining shuttles - Discovery, Atlantis and Endeavour - to flight status.

Commanded by veteran astronautEileen Collins, Discovery's STS-114 space shot is the first of two test flights- Atlantis' STS-121 mission is expected to follow in September - to shakedownnew tools and procedures developed to increase shuttle flight safety. Theorbiter bears a sensor-laden extension for its robotic arm, which STS-114astronauts will use to check the orbiter's sensitive areas for damage. Anextensive network of still and film cameras, as well as radar, is in place toscrutinize every phase of the launch. Even the astronauts aboard theInternational Space Station will play a part, photographing the orbiter

"I'm probably not quite as excitedbecause [July 13] was the real one," Stilson said of the upcominglaunch. "But it's building back up for me."

Meanwhile, Discovery's sistershipAtlantis is mated to its own external-tank launch stack and primed to roll outto the launch pad on Aug. 3. The shuttle rolled out if its OrbiterProcessing Facility and into the Vehicle Assembly Building on July 22.

Shuttle officials prepared theAtlantis for its STS-121 spaceflight in tandem with the work on Discovery inorder to have a back up spacecraft to retrieve the STS-114 crew from the ISS.That rescue plan, known as Contingency Shuttle Crew Support (CSCS) or "safehaven," calls for Atlantis to launch on a mission dubbed STS-300 by Aug. 22 inthe unlikely event that Discovery suffer extensive damage and isunable to return to Earth safely.

"We were processing for STS-121, fora [space] station flight...if in the slim chance we were called up for STS-300,we'd just go," Atlantis vehicle manager Scott Thurston told SPACE.com. "I dare say folks are moreexcited now than for STS-114 because now we have two shuttles ready to go...it'sa good thing that we're flying again."