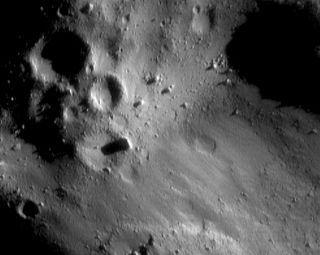 Most of what geologists know about Earth's interior comes from monitoring the seismic waves of earthquakes. Knowledge of the Moon's inner secrets was initially gleaned by slamming probes into it and studying the shock waves that careened through it.

Now scientists have stumbled on a way to passively monitor the shaking of an asteroid to learn what it is made of.

A new study of four-year-old data from NASA's NEAR-Shoemaker mission indicates that a set of vibrations caused by a collision with another space rock played a major role in sculpting the mug of asteroid Eros.

The idea was first put forth in 2001, but it was speculative. Now, an outside expert says, the hypothesis is solid as a rock, and it tells a story of Eros' composition.

Importantly, similar analyses could be used to passively peek inside other space rocks.

Eros is 20 miles (33 kilometers) long and about 8 miles (13 kilometers) wide. It is the most well studied asteroid. NEAR-Shoemaker mapped Eros in detail back in 2000-2001 before officials executed a controlled and dramatic crash landing, the first-ever touchdown on an asteroid.

Like any asteroid, Eros been banging around the solar system in some form for about 4.5 billion years.

In the early days of the solar system, when things were more crowded, collisions were frequent. Some large asteroids become smaller. Some small rocks stuck together and grew. Many were scooped up by the fledgling Earth and the other planets.

The asteroids that remain, confined mostly to a belt between Mars and Jupiter, harbor a tale of the solar system's formation. But first scientists have to figure out how to read their language, with an alphabet of craters and cracks and a grammar based largely on mineral composition and density.

Among Eros' most striking features is an impact crater 4.7 miles (7.6 kilometers) wide that scientists have determined was carved fairly recently. Another curious aspect to Eros is that across nearly 40 percent of its surface, all craters up to about a third of a mile (0.5 kilometers) wide have been erased.

The smooth surface has puzzled scientists since the NEAR landing.

The new study, led by Cornell University researcher Peter Thomas, nixed one theory by determining that the vanished craters could not have been covered by material ejected in the recent large impact. Further, the locations of the erased craters suggests they were jiggled out of existence by the internal vibrations caused in the impact.

The hypothesis, if right, can be used to glean an idea of how the asteroid is constructed. Scientists have long wondered if asteroids were solid rocks or, as is likely in at least some cases, loose piles of rubble that have undergone many collisions and managed to hang together.

"Our observations indicate that the interior of Eros is sufficiently cohesive to transmit seismic energy over many kilometers, and the outer several tens of meters [yards] of the asteroid must be composed of relatively non-cohesive material," Thomas and his colleague, Mark Robinson of Northwestern University, write in the July 21 issue of the journal Nature.

That outer non-cohesive stuff would be regolith, which on Earth is called dirt and on our nearest natural satellite is known as Moon dust.

"For the first time, the authors provide convincing evidence that makes this conclusion more than just reasonable conjecture," says Erik Asphaug, a scientist at the University of California, Santa Cruz who was not involved in the study.

The results confirm what Thomas first suspected back in 2001 and what University of Arizona's James Richardson Jr. found in separate work last year.

The findings are likely to remake the way asteroids are studied.

Scientists have used craters as a way to figure out how ancient or fresh a space rock's surface is. Myriad small craters suggest a long history and thus an old surface. A smoother surface with fewer craters would imply a rock had recently been cleaved or somehow resurfaced.

At least that was the thinking.

"This asteroidal Botox calls into question the habit of dating asteroid surfaces through their cratering record," Asphaug writes in a separate analysis in the journal.

A rubble pile, Asphaug explains, would dampen vibrations during an impact. That would leave more small craters intact, causing the asteroid to appear older based on the conventional method of analysis.

Eros, while it has a deep surface of loose material, is solid enough on the inside, at least in parts, to transmit seismic waves efficiently.

If convention is indeed overturned, the shift could be a boon to space rock studies.

The finding suggests large and newer impact craters, like the one on Eros, could be used as proxies for seismic data, Asphaug points out. The insides of other asteroids might be probed just by mapping their surfaces. "Thomas and Robinson's work also opens up a new way of looking at asteroids," he said.

Perhaps the passive technique could even go active.

Given the success of NASA's recent Deep Impact mission, which crashed a small probe into a comet, Asphaug sees value in a similar project that would first place seismic sensors on a space rock, so that the interior could be mapped during the collision.