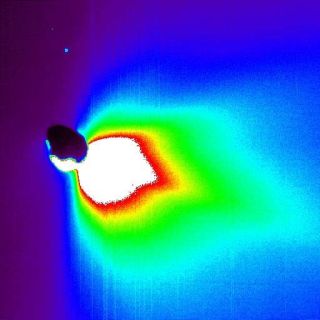 This false-color image shows comet Tempel 1 about 50 minutes after Deep Impact's probe smashed into its surface. The colors represent reflected sunlight, with white indicating the brightest materials and black showing the faintest. This brightness is a measure of reflected sunlight. The Sun is located to the right, out of the picture. The blue speck in the upper left corner is a star.
(Image: © NASA/JPL-Caltech/UMD)

Now that the fireworks are over, scientists are sorting through what was learned from the Deep Impact collision with Comet Tempel 1 on July 4.

"It looks like we got a pretty good pop," Pete Schultz from Brown University told SPACE.com yesterday.

Although Deep Impact's 820-pound impactor struck the comet's surface at approximately a 25-degree angle, it was still able to kick up an impressive plume of dust.

The preliminary images and data indicate the comet has a cratered surface that is too soft to be made of ice, once thought to be the main component of comets.  The impactor-induced crater was not visible directly due to the thick cloud of dust, but researchers estimate it to be at least 330 feet (100 meters) wide.

"The major surprise was the opacity of the plume the impactor created and the light it gave off," said Michael A'Hearn of the University of Maryland. "That suggests the dust excavated from the comet's surface was extremely fine, more like talcum powder than beach sand."

Hot vapor containing water and carbon dioxide was detected by Deep Impact's flyby instrument.  Researchers continue to comb through the mountains of data looking for other comet ingredients, while space- and ground-based telescopes monitor the collision aftermath from afar.

The amount of dust seems to indicate that the comet is not held together very tightly.  This might seem surprising, but it is not unreasonable for gravity to keep together a loose powder ball, scientists say.

"You have to think of it in the context of its environment," Schultz said. "This city-sized object is floating around in a vacuum. The only time it gets bothered is when the Sun cooks it a little or someone slams an 820-pound wakeup call at it at 23,000 mph."

Deep Impact's collision "woke up" the large dust plume, as well as some gases, including water vapor, carbon dioxide and carbon monoxide.  Some hydrocarbons were also detected, according to Schultz.

One of the primary goals of Deep Impact is to determine the first building blocks of the solar system, primordial material believed to be still locked up inside comets.  Schultz said that there is much more data to go through to see if indeed the crater coughed up some of this pristine stuff.

Water is a key ingredient to comet theories.  Scientists originally called comets "dirty snowballs," but recent evidence of a dearth of water has made snowy dirtballs seem more appropriate.

Measurements from the Submillimeter Wave Astronomy Satellite (SWAS) recorded only about 550 pounds of water per second from the comet surface.  This emission was similar to what was seen by SWAS before the collision.

"It's pretty clear that this event did not produce a gusher," said Gary Melnick of the Harvard-Smithsonian Center for Astrophysics. "The more optimistic predictions for water output from the impact haven't materialized, at least not yet."

The interior of a comet is partly frozen, but water vapor and other gases evaporate off of a comet due to heat from the Sun.  This emission is what gives some comets a tail.

A comet like Tempel 1, which has a short orbital period of 5.68 years, has been baked by the Sun many, many times.  Its outer edge was expected to be dry down to three feet, but if little water is detected, this dry zone will need to be extended theoretically deeper.

Schultz, however, thinks it is premature to say what the water content is.  He thinks the only thing that can be said for sure is that Tempel 1 is not an ice cube.  Observers are waiting to see if more gases might get expelled from the comet's new crater.

Besides SWAS, other telescopes of all sizes and wavelengths recorded the event, augmenting the 4,500 images from the Deep Impact spacecrafts.

One of these extra sets of eyes is the Swift space telescope, whose main purpose is to hunt for gamma ray bursts.

"Swift is only doing this on its spare time – taking off time from its day job," said Paul O'Brien of the Swift team at the University of Leicester.

Swift has observed ultraviolet light from the collision, and over this past weekend the telescope spotted a 10-fold increase in X-rays, which come from the interaction of solar wind particles and the ejected material from the comet, O'Brien explained to SPACE.com.

"Prior to its rendezvous with the Deep Impact probe, the comet was a rather dim X-ray source," O'Brien said.  "How things change when you ram a comet with a copper probe traveling over 20,000 mph."

The X-rays showed up about four days after the collision. The reason for this delay is that the comet is surrounded by a boundary layer – called the cometopause – which the solar wind cannot penetrate.  This is similar to the Earth's magnetopause, but the comet's protective shield is due to gas pressure rather than a magnetic field.

It was not until the comet material passed the cometopause – several thousands of miles out from the comet – that the solar wind could excite it to emit X-rays.  From the length of delay, scientists can rectify the size of cometopause with how fast material was blasted off the surface.

The Swift team will also be able to determine the amount of material excavated from the comet from the X-ray emission, which apparently peaked on July 9. With the data collected so far, O'Brien estimates that several tens of thousands of tons of material were liberated by the collision.

Tempel 1 has now separated itself from the flyby spacecraft by many million of miles, as it heads out away from the Sun.  Any additional data will have to come from on or near Earth.

The comet makes its closest approach to the Sun (1.5 times the distance between the Earth and Sun) every five and a half years, so followup observations may detect long-term changes that will give astronomers more insight into these dusty travelers.

A Comet's Life: Icy Adventure From Birth to Death